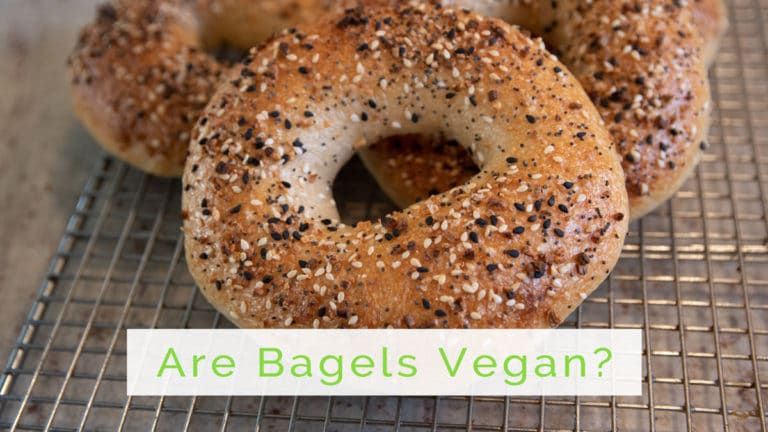 Regular bagels are vegan and usually don’t contain animal ingredients. However, some bagels can be baked with dairy or eggs, or have animal-based toppings.

Figuring out which foods are vegan and which are not can be confusing at times, especially when it comes to baked items, like bread. One look at the finished product doesn’t tell you whether it’s vegan or not, as the ingredients are not easily discernable. But being vegan, it’s important to figure out whether the food that you’re eating on a regular basis is in line with your values and morals.

Bagels, for those who don’t know, are a donut-shaped bread that comes in a variety of flavors. They’re extremely popular in the US and slowly gaining popularity all over the world. Bagels are the perfect accompaniment to your morning coffee and make for a great tea-time snack as well. They range from sweet to savory, and unlike some foods which are clearly vegan, bagels fall in the gray area, with some being vegan and others non-vegan. And this is entirely dependent on the ingredients used to make them.

To make a bagel, a yeasted dough is molded into the shape of a donut, boiled, and then dried. This bread is then put into the oven and the finished product is a bagel. The ingredients, toppings, and fillings used play a vital role in determining whether a bagel is vegan or not.

For the most part, however, regular bagels are entirely vegan and made using the following ingredients.

Bagels can easily be prepared this way, and as you can see, all the ingredients used are vegan. As such, in essence, bagels can be entirely vegan and do not require any non-vegan ingredients in their preparation. In some cases, nuts, spices, and seeds are added to enrich the flavor of the bagels.

When Bagels are Non-Vegan

While bagels are vegan for the most part and can be made entirely vegan, some recipes utilize non-vegan ingredients for various reasons.

In some cases, water is substituted with milk as a binding agent to help stick the dough together before rolling it into the shape of a donut. A few recipes even include eggs to give the dough a deeper color and thicker texture. In some cases, the final glazing on the bagel is also done by mixing eggs along with taste enhancers.

But eggs and milk aren’t the only non-vegan ingredients used while preparing bagels. You also want to watch out for honey and L-cysteine. Honey is used as a substitute for sugar and other sweeteners while L-cysteine is a dough softener used in certain recipes. While there are vegan methods of producing L-cysteine, most of the time this ingredient is derived from poultry feathers.

Bagels that use meat, fish, and cheese as toppings and fillings are quite common and clearly non-vegan. Some bagels also use hollandaise sauce and mayonnaise which may contain egg, so you want to steer clear of that as well.

But the good news is that bagels come in many flavors and you’ll find a variety of vegan versions to choose from. You just need to know how to identify which ones are vegan.

For the most part, bagels are vegan except for the ones that use non-vegan toppings and fillings. And when you’re looking through packaged bagels all you have to do is go over the ingredient list to determine whether they’re plant-based or not.

After exploring and understanding the health benefits of going vegan, it would be fair to say that basic vegan bagels are definitely healthier than their non-vegan variety. While consumption of meat has been associated with heart disease and diabetes, even the more basic bagels that use milk or eggs aren’t exactly good for you.

It’s popular medical knowledge that eggs are a great source of protein. And while they do contain some amount of protein, you only ingest that extra protein at the risk of soaring cholesterol levels. It’s been proven that eggs increase the body’s cholesterol levels and increased cholesterol causes blocks in the arteries, leading to strokes, heart attacks, and an overall depletion of one’s energy.

And if cholesterol isn’t your main concern, eggs may also contain a deadly bacterium called salmonella which is found on chicken farms. This bacterium can withstand intense cooking methods and is often found intact even in omelets and scrambled eggs. It can surely survive being turned into a bagel.

Many bagel recipes include milk to give the dough a thicker, softer feel. And while it serves the purpose to some extent, milk brings a host of negative effects with it. The saturated fat in a single glass of milk is often far greater than our daily requirements, and regular milk consumption can lead to weight gain and diabetes.

Recently, studies have shown that milk is also responsible for breaking down our bones instead of strengthening them. High levels of milk consumption put our body in an acidic state, where it leaches calcium phosphate from the bones to neutralize acidity in the body. The phosphorous is used to return the body to a more balanced pH level while the calcium is excreted from the body through urine. As such, regular consumption of milk, contrary to popular belief, can actually weaken your bones, making them more fragile over time.

Besides the obvious health risks of consuming eggs and milk through non-vegan bagels, people are also becoming aware of the cruelty inherent in dairy farms and hatcheries. Male chicks and male calves are regularly disposed of as by-products of the industry, as they are of no use. The fate of female chicks and calves is far worse as they are bred into a life of slavery and made to produce far larger quantities of eggs and milk than their bodies are naturally capable of.

And these ingredients go into making bagels, even though we’re already aware that delicious bagels can be made without all the cruelty! In fact, vegan bagels are easier to make and just as (if not more) delicious.

The use of honey is also quite unnecessary when other sweeteners like sugar and corn syrup are so readily available. And besides the higher economic cost, honey extracts a much larger price, both to the environment and to the bees who produce it.

Bee farms cross-breed different varieties of bees that are far weaker and succumb easily to different kinds of weather. And no matter how careful we are, hundreds of bees die to defend the honey that we so eagerly covet.

While this in itself is unnecessarily cruel, the large-scale implications would be a reduction in the bee population, which can have an unimaginable impact on ecosystems around the world.

By simply switching to vegan bagels, we can help reduce the cruelty, exploitation, and potential environmental consequences that are sure to follow if we aren’t careful.

How to Be Healthier with Bagels

If you’re looking for healthier bagel options, here are a few alternatives to consider.

Whole wheat bread is packed with a lot more nutrients and makes for a more wholesome meal.

This is made using whole grains that were allowed to sprout or germinate, which greatly increases the amount of fiber, proteins, and vitamins in the bread.

These are just a few healthier options to consider if you’re concerned. However, while vegan bagels may not exactly be healthy, they are far from harmful to your health.

As you can see, vegan bagels are healthier, cruelty-free, and far easier to make than the non-vegan variety. As such, there’s no real need to continue making non-vegan bagels; but that’s a discussion for another time.

For now, you can rest easy in the knowledge that vegan bagels can be found in plenty, and you won’t have to worry about giving up your favorite snack.