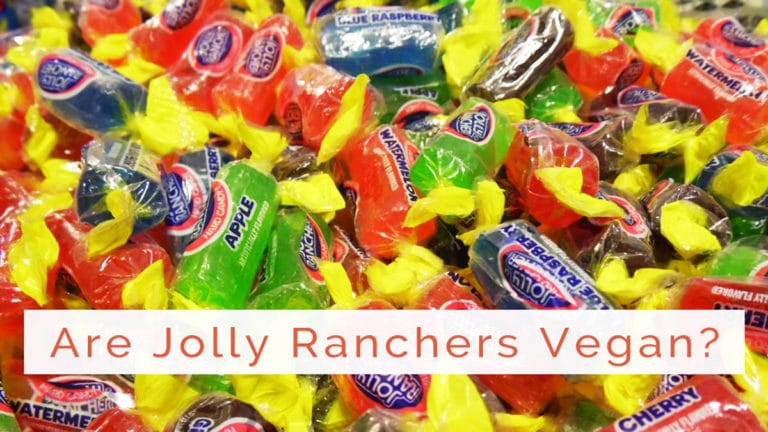 According to The Hershey Company, Jolly Ranchers are not vegan. Their artificial colors may have been tested on animals, and the sources of their natural flavors are unknown.

Mmmm… the sweet taste of Jolly Ranchers. For those of you who are not familiar, Jolly Ranchers is an American brand of sometimes sweet, sometimes sour, hard candy, gummies, fruit chews, lollipops, jelly beans, and Twizzlers.

But where did this simple product come from and how did it become so popular?

The Jolly Ranchers Company was founded in 1949 by Bill and Dorothy Harmsen of Golden, Colorado. They started off by selling hard candies, chocolates, and ice cream to children living around Denver, Colorado. The name Jolly Ranchers was meant to suggest a friendly and hospitable western company to attract as many people as possible. Although selling products that children love, it was clear that one product was more popular than the others—hard candies. As ice creams didn’t sell in the shivering Colorado winter months, the couple decided to focus on hard candies as they were popular all year round.

In 1951, the candy production center moved from Golden, Colorado to Wheat Ridge, Colorado. The company was sold for the first time in 1966 to Beatrice Foods. The company was sold a few more times after to different owners, before finally being bought by The Hershey Company in 1996. The Hershey Company expanded the range of Jolly Ranchers to include lollipops, jelly beans, fruit chewies, sour candy, and gummies. There are also special Jolly Ranchers for Halloween, Christmas, Easter, and Valentine’s Day, to make every holiday a Jolly holiday.

Jolly Ranchers has come a long way from being sold in the Ranch Maid Ice Cream stores in the Denver, Colorado area, to now being sold in supermarkets and convenience stores all over.

Fast forward to today, like me, there are many of us who wonder if Jolly Ranchers are vegan or not. There are some groups that say yes, but there are equally many that say no.

Even under the Frequently Asked Questions on the Hershey’s website, it states that Jolly Ranchers are not vegan. Is it not really? And if so, why?

Why Jolly Ranchers Are Not Vegan

As mentioned above, Jolly Ranchers has a range of products: hard candy, lollipops, jelly beans, and soft candies (bites, chewies, gummies). Let’s go through each one to determine if Jolly Ranchers is vegan as a whole, or if some products are, and others not.

As you can see from above, there are some listed in red. These are considered controversial ingredients that we will discuss in detail below.

There is also an ingredient in red and bold—GELATIN. As we have learnt from a previous article, gelatin is not vegan. It is derived from animal byproducts. Hence, the Jolly Rancher Chews and Gummies are a definite No for vegans.

Sugar is used in almost all candy products and is typically one of the first few ingredients listed. Sugar itself may not be a controversial product by itself, but refined cane sugar is because refined cane sugar is often processed with bone char to achieve the pure white color. The sugar itself, as a final product, does not contain any bone char particles but is not considered vegan by many due to the processing methods used. This is not explicitly stated in the ingredients list or in The Hershey Company’s website.

Depending on how strict of a vegan you are, you may want to avoid refined cane sugar or check the refinement process.

Natural and artificial flavors can come from both animal or plant sources, but the natural flavors in candies are typically from plant sources. Food manufacturers are not required to list exactly what the natural flavors are, but they are required to disclose if any major allergens are used to create the natural and artificial flavors and therefore they should be noted below the ingredients.  However, in the case of Jolly Ranchers, after further investigation, The Hershey Company itself says they are not vegan because they cannot confirm the source of the natural flavoring. The Hershey Company cannot guarantee that Jolly Ranchers are suitable for a vegan diet as they cannot confirm if their supplier uses plant-based flavorings due to a proprietary natural flavor ingredient supplied from the third party.

Lecithin is a fatty substance used in processed foods and health supplements for its emulsifying and stabilizing properties. It can be derived from both plant and animal sources. From the list of ingredients above, for some products only lecithin is listed, while others state soy lecithin. Hence, we can safely assume that plant-based lecithin from soy is sometimes used in Jolly Ranchers products. When it comes to other products, it is always safe to check the list of major allergens.

Artificial colors are controversial in the vegan community because some are derived from animals and some are even tested on animals.

The artificial colors used, Red 40, Yellow 6, Yellow 5, and Blue 1 are not derived from animals.

Red 40 tends to be derived from petroleum but can also be produced from strawberries. Red 40 is the most commonly used food coloring. Unfortunately, it is routinely tested on animals and thus certainly comes with animal cruelty.

Yellow 5 and 6 are by-products of the petroleum industry. Both of these have been confirmed tested on mice, rats, and rabbits, who are promptly killed at the end of the study. Yellow 6 has also been linked to hyperactivity in children.

Blue 1, also known as Brilliant Blue, is chemically synthesized and not derived from animals. Sadly, this artificial color has been tested on mice, rats, and dogs over the years. In the case of dogs, they were fed the dye in their diet to find the maximum ingestion amount before it caused death.

Because of these forms of cruelty, these artificial colors are definitely not vegan.

Based on the use of these artificial colors alone, all the products of Jolly Ranchers are not vegan. The essence of being vegan is kindness, respect, and compassion to all beings.

Furthermore, there’s no way to know if the natural flavors in Jolly Ranchers are derived from animals. Manufacturers aren’t required to give this information and we can only refer to the list of major allergens disclosed.

Based on our analysis, Jolly Rancher products are not vegan because we cannot confirm the composition of the natural flavoring, the possible use of bone char in the sugar refinement process, and most jarring of all, they are not cruelty-free due to the artificial colors used.

As vegans, let’s stay on the safe side and opt for a different hard candy that is known to be vegan.  Some of them are GoOrganic Hard Candies, Airheads, and Dum Dums. Also, try to avoid products with artificial colors and opt for natural plant-based colors from beets, mangosteen, and strawberries, to name a few.

Secondly, always check the list of major allergens to somewhat have an idea of the source of natural flavors and lecithin used.

Finally, let’s be more conscious of our sugar choices; let’s commit to look for brands that do not use bone char in their refinement process, or let’s avoid refined sugars altogether for better health.

Being vegan doesn’t mean having boring food choices. With a little research, you can become well-versed in vegan alternatives for your favorite foods. This way, you’ll never feel restricted or deprived.