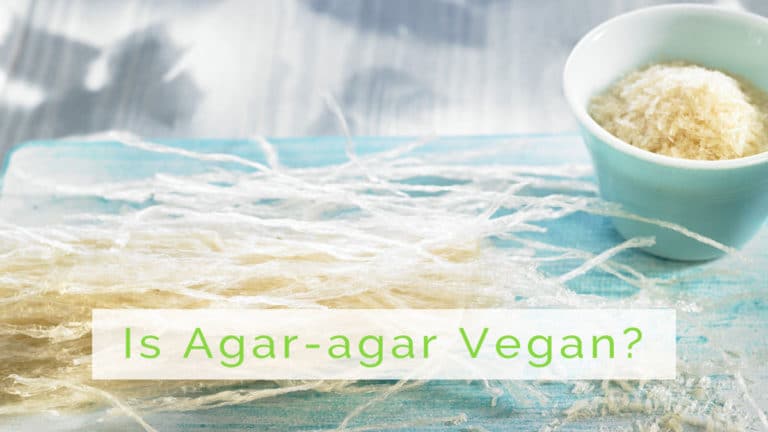 Agar-agar is vegan because it is entirely plant-based and derived from red seaweed. It is often used as an alternative to gelatin, which is non-vegan. But unsustainable harvesting of red seaweed is an issue.

Agar-agar, also known as kanten, is well-known in the vegan community as a plant-based alternative to gelatin and as a vegan gelling and thickening agent. What is it exactly and where does it come from? And, is it really vegan?

Before we delve into it, we must first define what veganism means to us. Veganism is a movement, including a political one. Veganism is about re-examining and changing our relationship and the way we connect with Mother Nature, the Earth, the animals, and humans. Veganism is a way to end exploitation, commodification, discrimination, and oppression of other beings. Therefore, when selecting foods, clothes, or anything for that matter, I ask, as much as possible, if the Earth and any other beings were harmed, directly or indirectly, in and around the process of creation of a particular food or product.

Now let’s get to it.

Agar-agar is a semi-transparent, tasteless jelly-like substance obtained from red seaweed. Agar-agar is commonly used as an ingredient in Asian desserts—all the way from Japan to India. It has also been used as a thickening agent for soups, in fruit preserves, ice cream, and many other desserts, including the highly popular bubble tea from Taiwan.

In Russia too, agar-agar is used to make jams and marmalade due to its superior gelling properties, even when compared to gelatin, and in soufflés and custards as a strengthening agent.

In Mexico, the traditional Dulce de Agar is made with agar-agar.

Agar-agar can also be used instead of gelatin as a clarifying agent. It can be used to make vegan beer and wine.

Other than food-wise, it can be used as a laxative due to its high fiber content. The soluble fiber found in agar-agar absorbs water in the gut and forms bulk which acts as a natural laxative.

In addition, agar-agar has been used in science. It is used in laboratories—most famously in petri dishes to culture bacteria. Being firmer and stronger than gelatin, agar-agar is the preferred medium to grow bacteria as it was found that the bacteria doesn’t degrade agar-agar.

Agar-agar is also used in the dental field, pharmacology, cosmetics, in the farming industry, and as a natural ingredient in forming modeling clay for children to play with.

Basically, agar-agar is the plant-based thickening, gelling, strengthening, and emulsifying agent. It is also known to be stronger and has more superior gelling properties compared to gelatin.

Now, how did we discover agar-agar?

Agar-agar was discovered by accident in Japan. Around the 1660s, an innkeeper, Mino Tarozaemon, served some special guests seaweed soup. After dinner that night, there were a lot of leftovers and the innkeeper threw out the balance. However, when he woke up the next morning, he found the left-overs had gelled—becoming jelly-like.  He took the residue and, to his surprise, found that by boiling it up with more water, a jelly could be made. He shared his discovery with a relative and since then, they began harvesting and processing red seaweed into a product known locally as kanten. Just like that, agar-agar became widely used in Asian desserts.

Although known as kanten in Japanese, the name agar-agar comes from the Malay name of the red seaweed from which this substance is produced. It is also known as China grass, Ceylon moss, and Jaffna moss.

Some of the benefits of agar-agar include maintaining a healthy digestive system (due to its high fiber content) and reducing cholesterol levels as it is said to absorb bile. By absorbing bile, the body dissolves more cholesterol.

Other benefits include maintaining healthy bones due to the high calcium and magnesium content as well as maintaining brain health due to the simple sugar molecule, galactose, which makes up the agar-agar. Galactose is commonly referred to as brain sugar.

Agar-agar can be bought from supermarkets and Asian grocery stores in powder form, in forms of sheet, strips or strand, and in flake form. The sheet form and the strip form are the less processed form of agar-agar.

Now is agar-agar really vegan? We know that animals were not harmed or exploited in any way in the production of agar-agar. There are no known reports of harm to the environment, including the air, and animals in harvesting and production of agar-agar. These factors have been researched and analyzed by the Italian Association of Chemical Engineering. When it comes to humans, there are no known reports of abuse and exploitation. Great news!

However, with agar-agar being more popular in the global north, are we overharvesting the red seaweed leading to environmental degradation and/ =or animal food deprivation? Also, are those working in this field being oppressed and exploited? Also, what are the consequences of overharvesting this red seaweed to the environment and all beings?

Some of the major producers of agar-agar used to be Japan, Korea, Spain, and Portugal, however, their production has now reduced and due to this Morocco is now the major exporter of agar-agar.

The dependence and pressure on Morocco for their agar-agar can be dangerous. This has brought about some major issues such as:

There is evidence of over-exploitation of the Moroccan beds to meet the demand and to profit, despite the government placing quotas restricting its harvest since 2010. In addition to the rising demand, the price of agar-agar has gone up and resulted in the increase of unlicensed harvesters such as local fishermen. The fishermen are also endangering their lives as they are willing to dive deeper, risking their lives, in search of more red gold.

There are both social and nature-related consequences. Socially, the safety of the fishermen, when it comes to nature, overharvesting seaweed has apparent negative consequences to the local marine ecosystem.  Seaweed plays a major role in marine ecosystems, they are considered keystone species since they are one of the first organisms in the marine food chains. Seaweed provides nutrients and energy for animals, either directly when eaten, or indirectly when decomposing parts break down into fine particles and are taken up by filter-feeding animals. Seaweeds also help to mitigate climate change. They act as filters by taking up nutrients and carbon dioxide from seawater reducing local coastal eutrophication and ocean acidification.

Mexico also exports agar-agar and is known as a stable agar-agar producer. The estimations of their maximum sustainable yields suggest that the resource has not been over-exploited.

Cultivation is also another way to go, however, cultivating the red seaweed is not simple as they take time to grow and has proven to be costly. To date, it appears that one Canadian company, based near Vancouver, Marine Bioproducts International Corp., has been successful in cultivating the red seaweed. They claim to be growing a consistent, high-quality seaweed from which it produces high-grade agar-agar products. One can only imagine the cost of this agar-agar when it hits the market.

Other pond cultivation efforts have been successful in China, Vietnam, Taiwan, and Indonesia, but a different species is used in which the agar-agar extracted is usually of low gel strength.

We have to remember, just as with everything else, crazes, in any form, in these current times have a more significant impact compared to prior due to the presence of social media, 24-hours news, internet, technology, globalization, among others. One way we as consumers can help reduce any negative impact is to eat locally appropriate foods and support small community businesses, where we can as much as possible, to stop exhausting the environment, animals, humans, and displacing locals from their food, culture, and roots—as we have seen with quinoa.

It is okay to eat imported items but as long as we do it in balance. Remember, being vegan is a lifestyle that values and respects all lives. The production of agar-agar has been fine all along, until the demand for it increased. The environment, animals, and humans may not be harmed in the process of production but the overproduction can have significant ramifications, maybe to those not directly involved in the production, but to those indirectly involved. Balance is always the key.

In a nutshell, agar-agar is plant-based, but is it vegan? It depends on what veganism means to you, but by most definitions agar-agar is vegan.

Yes, agar-agar is vegetarian, but more importantly, it is also vegan because it doesn’t contain any animal products.

No, agar-agar is not gelatin. It’s actually a plant-based and vegan alternative to gelatin and is derived from red seaweed.