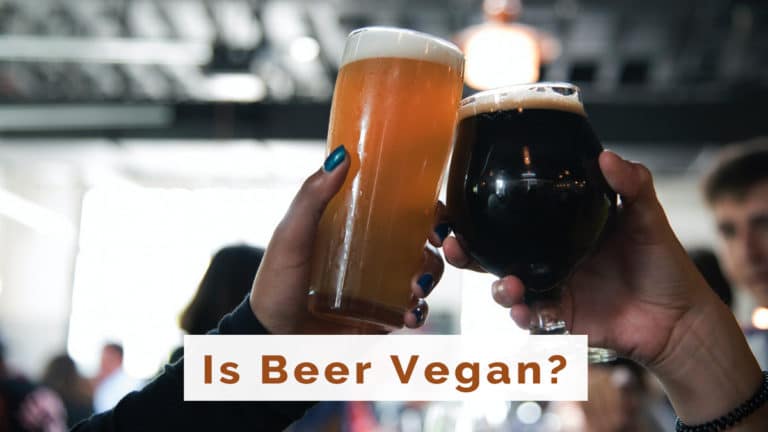 Most beers are vegan, however, there are exceptions. Some breweries use non-vegan fining agents, making the booze not vegan to many individuals. Furthermore, beer with honey or cream is not vegan.

Perhaps one of the most perpetuated myths about going vegan is the fact that you’ll have to give up a lot of your favorite food and drinks. But today, with vegan alternatives to every imaginable ingredient, you don’t really have to give up anything you don’t want to; simply replace.

A popular area of concern for every budding vegan is that of alcoholic beverages, especially beer. There’s a lot of skepticism regarding whether beer is totally vegan or not, but you can rest easy as most beer today, especially the mass-produced popular brands, happen to be vegan.

However, while vegan beer is the norm among most brands, there are exceptions and certain breweries and brands still use animal products in their beer. While some brands add non-vegan ingredients to the finished product, in most cases animal products are used in the process, to refine the beer and not actually as a part of the consumable.

When is Beer Non-Vegan?

Most breweries in business today are aware of the growing number of vegans and how this segment of the market can impact the sale of their products. They also know that they can quite easily produce completely vegan beer without any change in flavor or strength. In fact, some breweries like Heineken and Samuel Smith have made public declarations that their beers are completely vegan.

But in certain cases, it’s not just the process, but the finished product itself that uses non-vegan ingredients.

Some breweries use honey as an adjunct (a way to enhance flavor or taste) to add a sweet twist to the end product.

Certain beers contain lactose — a type of sugar derived from milk. Lactose does not break down even during the yeast fermentation process hence giving the beer a subtle sweetness. However, beers containing dairy are clearly labeled or named cream stouts so consumers are aware of the presence of dairy.

Traditionally, breweries used actual oysters as a part of their brewing process, to lend a different taste and flavor to the beer. A few breweries today have switched to using vegan substitutes to replicate the same flavor, but a few continue to employ the traditional method so it’s best to simply stay away.

These are three of the more popular non-vegan beers and you’re sure to find more in the market, including bacon beer and cheesecake beer. But thanks to their names, it’s easy to distinguish between vegan and non-vegan beers. And even the best breweries in the world offer a variety of beers that are entirely vegan.

But if the beer isn’t clearly named, how can we tell whether it’s vegan?

Clear beer is a recent invention, and for most of history, beer was a dark, hazy liquid, drunk out of wooden or stone bowls. Its appearance was irrelevant and people simply drank to enjoy the effects it induced.

But this clarity was not simply for appearance; removing the haze and other organic compounds in the beer resulted in a more coherent taste. Darker, cloudier beer deteriorates rapidly, diluting the taste of the beer and reducing its effectiveness.

For clarity, breweries use a substance they call finings which they add during the brewing process. Finings help to break up the protein and yeast in the beer, which combines to form the haze. This breakdown of the haze results in a clear liquid with a distinct taste.

Isinglass is a collagen-based additive that is used to refine beer and it’s been popular for years among breweries across the world. Isinglass is derived from fish bladders, and beer manufacturers are slowly realizing that by removing this ingredient they can access a larger market, namely vegans and vegetarians.

Gelatin is a popular fining as well, cheap, and easily available. However, gelatin is obtained using the byproducts of the meat industry, making it a non-vegan ingredient.

Gelatin is a protein obtained by boiling the skin, tendons, bones, and ligaments, of livestock, especially cows and pigs. This process helps to extract a collagen-like substance (gelatin) that is used to thicken and stabilize certain foods.

By abstaining from the consumption of non-vegan beers, you actively choose to avoid taking part in animal exploitation. Additionally, as more people choose to stay away from non-vegan beer, the demand for vegan beer continues to rise and breweries are switching over to vegan finings and production processes.

Irish moss is a dried additive that is derived from seaweed and performs the same function as isinglass, reducing protein haze and helping to produce clear beer.

Just like Irish moss, Whirlfloc tablet is derived from seaweed. However, Whirfloc includes purified carrageenan, which is a vegan substitute for gelatin and happens to be the active compound in Irish moss. As such, Whirlfloc tablets do a great job of stabilizing beer and precipitating the proteins in the drink.

With these vegan alternatives performing the same function as isinglass and gelatin, it’s surprising that some breweries still continue to use non-vegan ingredients in their production process.

But remember, production is based on demand, and the more we demand vegan beers, the more pressure on these breweries to switch over to vegan methods of production.

And by staying away from non-vegan beer, you exert an indirect positive influence on the environment as a whole.

How Vegan Beers Help the Environment

As more people are becoming aware of the severe impact that non-vegan products have on the environment, the need for vegan alternatives is on the rise. And while the brewing of certain beers may not directly depend on non-vegan ingredients like meat and fish, their demand for isinglass and gelatin contributes to the growth of the animal farming industry.

The meat and dairy industry, from which gelatin is obtained in massive quantities, is responsible for large-scale deforestation projects carried out to set up space for vast herds of animals. Animals like pigs and cows need vast quantities of food to sustain them for a few years before they are slaughtered. To produce food for these animals, more forest land is cleared and crops like soy and corn, which provide little nutrition to the soil, are cultivated.

To maintain millions of cows, pigs, sheep, and other livestock requires unimaginable quantities of water. Cows, on average, drink roughly 150 liters of freshwater every day! Multiply this into thousands of cows and add all the water used to clean the pens and stables. Now imagine the amount of water being used across the animal farming industry, for all kinds of livestock.

That’s thousands (if not millions) of liters of water drained every week, and most of this water is agricultural runoff, seeping into the soil and flowing into lakes and other water bodies, polluting them in turn.

By staying away from products with gelatin you refuse to participate in supporting an industry that is causing such large-scale environmental damage.

Fishing techniques like bottom trawling and dredging destroy the habitats of many marine species. Fishing also leads to an imbalance in certain populations of fish, which disrupts the food chain, causing those below to overpopulate and those above to die out due to lower food supply.

Finally, fishing also results in unwanted catch, where sharks, dolphins, turtles, and other larger marine animals are caught in fishing nets. Most of the time, these animals are allowed to stay entangled in the nets, left to die slow, horrible deaths. These animals who are killed or left to die as byproducts or pests of the fishing industry play an important role in marine ecology, and their deaths result in an imbalance in the ocean environment.

By switching over to vegan beers (which is, honestly, quite easy to do), you actively avoid supporting these cruel and exploitative industries that continue to harm the environment for profit. And it may seem like a small step, of little significance, but every step towards a more vegan world is imperative if we hope to see a more environmentally-stable planet.

Consumption of non-vegan beers has an impact that’s both far-reaching and all-encompassing. Most breweries today have mastered the art of crafting vegan beers, even offering honey and cream stouts that replicate the taste without actually using any non-vegan ingredients.

As such, vegan beer comes in a range of flavors and you can always check the ingredient list to make sure you’re getting the right one. But here is list of certified vegan beers that you can check out to get started. So, cheers to having your next few pints with a clear conscience!

Yes, Budweiser is vegan. But Budweiser Clamato is not vegan.

Yes, Bud Light is vegan. But Bud Light Clamato is not vegan.

Yes, Coors Light is vegan except in the UK.

Yes, the traditional flavor of Guinness and many of its flavors are vegan. However, Guinness Nitro IPA, Rye Pale Ale, Hoppy Pilsner, Dublin Amber Ale, The 1759, Citra IPA, and Harp Lager are all not vegan.

Yes and no. Some brands of root beer are vegan, while others are non-vegan. A&W Root Beer is vegan, but if you get their root beer floats, then it will be non-vegan because it contains dairy.

Is all beer vegan?

No, not all beer is vegan, especially beers containing honey or creams.