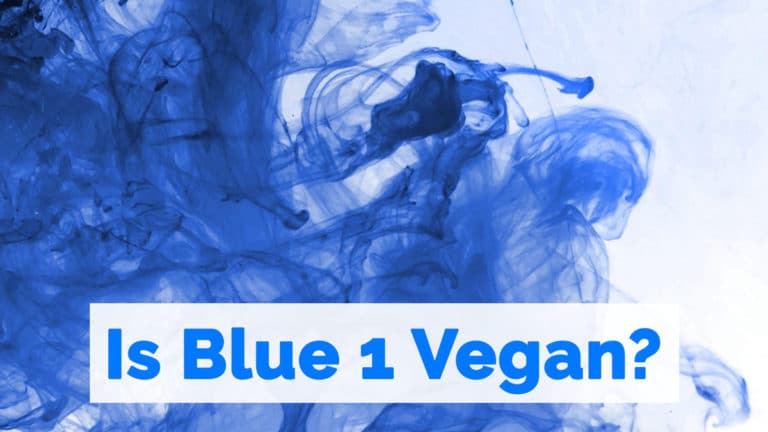 Though it does not contain animal ingredients, Blue 1 is not vegan because it is sometimes tested on animals.

Similar to the other dyes, this intense blue color is used in everything from candies, ice cream, soft drinks, dairy products, to canned peas, toothpaste, soap, and other hygiene and cosmetics products, and possibly to color your blue jeans and even your favorite liquor — Blue Curaçao.

Besides that, it is also used to trace water, as Blue 1 is said to have low toxicity, according to the United States (US) Food and Drug Administration (FDA). Blue 1 is one of the earliest artificial dyes approved by the US FDA; it was approved in 1931. This dye is still on the List of Approved Dyes by the US FDA, and it has not changed its stance despite new studies being done recently on the dye.

Although the US FDA has been trying to correct its past errors — there was an eyelash dye approved by the US FDA that caused blindness in some women; it still has a reputation of not going far enough to protect its citizens’ health.

Where natural colors were previously used, we have now turned to artificial dyes as it is more cost-effective: easier to produce, and just using a little gives you strong, intense colors.

Blue 1 is an azo dye, meaning synthetic color derived from petroleum (previously coal tar). It is mixed with chemicals, commonly benzidine, a chemical notorious for being cancerous by the National Cancer Institute.

This artificial color is used in many things from your M&Ms, Jolly Ranchers, lollipops, cotton candy, and icing, but also in soup packets and canned peas. It makes us wonder why it is to color peas despite peas having their own color already.

It’s not just in foods. It is also used to make the blue eye shadow or your little blue jeans or shorts. Even the ever-popular blue Listerine mouthwash — yes, it is Blue 1 that gives the mouthwash its distinct blue hue. From mouthwash to shaving creams, yes, Blue 1 is used in them too. The list can go on.

Artificial dyes are prevalent everywhere, even in things you least expect. It is a must to always read the labels and Google the ingredients. We have to educate to make informed consumer decisions.

Is Blue 1 Safe to Consume?

Just like Red 40, Yellow 5, and Yellow 6, Blue 1 is heavily linked with hyperactivity or ADHD in children. It has also been linked with allergic reactions, asthma, chromosomal damage, cancer, and possible organ damage.

Until 2013, it was thought that Blue 1 was not absorbed by the gastrointestinal tract and that most of it was passed out via the feces. However, scientists have found shocking evidence that the dye is, in fact, absorbed and enters the bloodstream via the tongue, skin, and digestive tract.

This is troubling, as when the dye enters the body, it can inhibit cell respiration. The process in which we produce energy or when our cells need oxygen to recover does not occur at its optimum level. It can lead to severe damage to the body in the long run, as a particular study conducted on pigs has shown. The next time you think of licking a bright blue lollipop that will be in direct contact with your tongue, think again.

There has been a myriad of other studies done previously, and these studies have shown that Blue 1 is a carcinogen when tested on rats, mice, and dogs. In the case of dogs, they were fed the maximum amount until it caused their death. Poor beings.

Despite all these, the dye is still considered safe by the US FDA, and the amount used is not regulated. However, as all previous dyes reviewed, companies that use artificial dyes in their products must list it under the ingredients.

Across the pond, the use of Blue 1 has been approved by the European Union (EU), but it is considered unsafe for children. Like the other dyes we have covered, manufacturers are required to list the artificial dyes used on the label of the product and add a warning on the labels of foods containing the dyes. The warning is stated as: “May have an adverse effect on activity and attention in children.”

Blue 1 has been banned in France and Finland. Whereas in the United Kingdom (UK), the government has asked all food manufacturers to stop using artificial dyes since 2009. Companies like Kellogg’s and Kraft Foods have turned to natural solutions such as turmeric, annatto, and paprika, amongst others.

Although being 100% plant-based, Blue 1 would not be considered vegan. The dye tested on rats, mice, dogs, and pigs has shown adverse side effects — harming these guiltless creatures.

If that’s not enough, it has been proven to be dangerous to humans too.

Are There Natural Alternatives to Blue 1?

Naturally occurring colors are available and have been in use since ancient Egyptian times. Wine, too, was colored using these natural solutions. Spirulina, paprika, turmeric, beetroot, mangosteen are all natural coloring alternatives.

Other than spirulina, as mentioned above, natural blue dye solutions include the Indigo plant (Indigofera). The use of the Indigo plant goes back 4,000 years ago. A recipe to dye wool with indigo was found written on a Babylonian tablet dated to the 7th century BC. It was also found to be used during the Egyptian civilization and in Neolithic Europe. The Celts in Scotland also used indigo from the woad plant to dye their faces.

There are other natural solutions which are not blue, but purple. All you need to do is play around and mix the colors to get the shade you are looking for. The other options include beets, mangosteen peel, grape juice concentrate, and grape skin extract.

Experts will say these colors are not as intense as the synthetic ones, and they washout, but, in the name of our health and the environment, this should be more than enough. Remember, less is always more.

What Can We Do?

Learning is the only way to stay alive; life is a never-ending school. We don’t stop learning when we graduate from school. By learning, we become more aware, and we can then spread the knowledge and make informed decisions, not just for us, but for our families.

Yes, I know, we are humans, and we do need that break sometimes, and that is perfectly fine. As they say, take a break, and have a vegan Kit-Kat (hope we get one in the market soon). But in all sincerity, once you are well-rested, revitalized, and reenergized, get back into the school of life, and you will progress faster and more energetically.

Find your magnum opus, and always know that your life’s work and dedication will inspire others. “Your life is your message,” as respectable Gandhi said.

The hard work will and is paying off slowly, but surely. Big companies are removing synthetic colors altogether or replacing them with natural ones — a good step on the long road ahead. Don’t feel disheartened whenever it seems our efforts have no impact; it does. It is all happening in the background; we can’t see it yet. It takes many small steps to walk the entire mile of the road.

With our new knowledge helping us make conscious decisions, we can hold companies and authorities accountable, ensuring they make healthier, kinder, and more compassionate choices for humans, animals, plants, soils, waterways, air, our biodiversity, the ecosystem, and of our one blue planet.