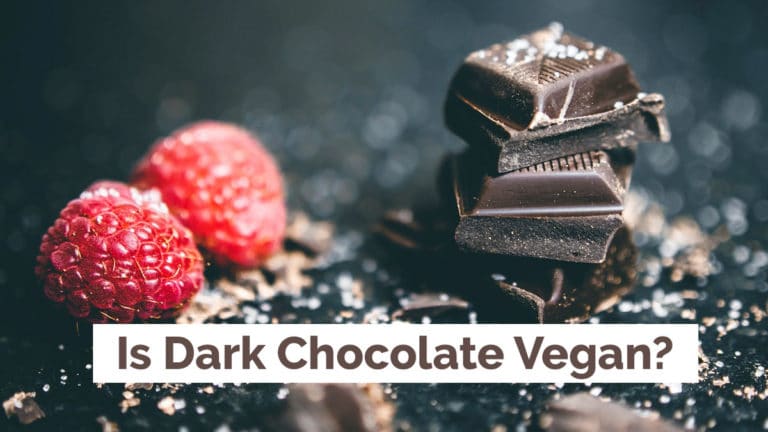 Most dark chocolate brands are vegan. However, some manufacturers still use milk and other animal derivatives in their recipes. It’s best to always check the ingredients label.

The consumption of chocolate (or rather cacao, a bean used to make chocolate) dates back thousands of years. In fact, the first ‘hot chocolate’ was a cacao-based drink that the people of the Aztec civilization consumed.

They would brew a spicy version of hot cocoa, and entire tribes would consume the drink during religious rituals and celebrations. Since then, chocolate has come a long way, and today, this ingredient (cacao) is transformed into an unimaginable variety of goodies and treats.

What is Dark Chocolate?

Dark chocolate is a form of chocolate made, so at least 50% of the chocolate bar contains cocoa solids. The higher cacao content is what gives dark chocolate its unique bitterness and flavor.

Regular chocolate bars (or milk chocolate as they’re popularly called) contain anywhere between 10% and 50% cocoa solids as well as milk solids. Companies generally put milk in chocolates to alleviate the bitterness and add a creamier texture. However, it is possible to achieve the same taste and texture without using dairy.

How Is Dark Chocolate Made?

While most of us are used to seeing chocolates in the form of solid bars, there’s actually a whole process that goes into creating these delicacies.

Dark chocolate comes from the cacao tree, which is grown primarily in West Africa, where farmers are paid to harvest the crop. Today, however, there are fair-trade farms in Indonesia, Peru, and other parts of the world where cacao is sourced ethically.

The cacao fruit is harvested in large numbers, and each fruit contains dozens of pod-like seeds, which are, in fact, the cacao beans in raw form.

These beans are usually kept between layers of banana leaves for a few days to drain the pulp and most of the moisture.

Once the pulp is removed, the beans are sun-dried at the farm and then sent to a factory for processing. During this phase, the beans are generally fermented and roasted, which lends them a characteristic crunchy texture and allows the cacao’s flavor to really surface.

When the beans have been thoroughly roasted, they become fragile and broken into small bits and pieces called ‘cacao nibs.’ These cacao nibs are further ground or refined into what’s known as ‘cocoa solids,’ during which the fat, or cocoa butter, is extracted and stored separately.

In traditional chocolate manufacturing plants, these cocoa solids are mixed with varying degrees of milk and sugar to produce a specific kind of chocolate that the company is aiming to create. In most cases, cocoa butter is added to the mix in order to soften the chocolate and make it less brittle.

Some dark chocolate brands avoid using milk in the manufacturing process and simply use cocoa butter and sugar, along with soy lecithin in certain cases.

It’s evident that dark chocolate can be made vegan if only one tweaks the manufacturing process and avoids using non-vegan ingredients. After all, the source (cacao) is plant-based and free from any animal products.

Another ingredient that vegans tend to get confused about is ‘cocoa butter.’ The word ‘butter’ usually denotes something non-vegan, but cocoa butter is extracted from the cacao nibs themselves and is completely plant-based.

Ingredients To Watch Out For

As mentioned earlier, milk is the prime non-vegan ingredient in most dark chocolate bars, but it’s also relatively easy to spot on the ingredients list of the product.

The world is now becoming more aware of the dairy industry’s horrors and its cruelty in producing milk. Cows are ‘preserved’ and treated like milk machines with no use except to provide us with milk.

They live short, brutal lives, during which time they are often sick and emotionally distressed. And all so we can add a little bit of milk to our chocolate and other foods.

By avoiding milk and consuming pure dark chocolate, you abstain from participating in this cruel practice. And it’s easy to do this today as there are so many vegan chocolate options available to us.

Some manufacturers add honey to their dark chocolate bars to lend a distinct sweetness to the chocolate. And while honey may seem harmless, it’s one of the more subtle and dangerous non-vegan ingredients on the market.

Bees are forcibly bred, and their honey is stolen and replaced with a sugar substitute that provides the bees with very little nutrition.

Each beehive is made from honey, and the bees of a particular hive need that honey for their nutrition and survival. However, this honey is stolen and replaced with a substitute to give the bees an alternative source of nourishment.

This sugar substitute lacks the necessary nutrients required, and without the honey, the bees are prone to diseases. This causes hundreds and thousands of bees to die out during the bee cultivation process.

Additionally, bees don’t tolerate intruders and will defend the hive with their lives. As a result, hundreds of them die trying to protect their home from the bee handlers over whom they have no power.

As such, honey is ironically bad for the bees and is causing their populations to plummet. And without bees, we risk losing the natural environment and ecosystem in which we live.

This is one of the more tricky ingredients on this list, and there is no real way of knowing whether natural flavors are vegan or not.

The term ‘natural flavors’ refers to a wide array of possible ingredients extracted from plants and animals to replicate a particular taste.

The reason they’re termed ‘natural’ is that they are created from something that occurs naturally.

Many natural flavors are extracted from animals kept in labs and poked and prodded with various needles and tubes.

So if you find a dark chocolate bar containing ‘natural flavors,’ it’s best to avoid it unless the manufacturing company states it’s vegan.

The best way to secure a regular supply of vegan dark chocolate is to head to the nearest grocery store and go through all the chocolate bars and find the ones without milk, honey, and natural flavors. That way, every time you crave chocolate, you know how to get your fix.

But always remember to it sparingly as an excess amount of sugar can have an adverse effect on a plant-based diet.

And if you’re unsure where to get vegan dark chocolate, here are a few options you can check out:

Hu creates some of the most health-conscious dark chocolate bars in the market. Besides being vegan, most of their chocolate bars are also gluten-free, sugar-free, and free from additives and unnatural substances.

Their Puffed Quinoa dark chocolate is especially delectable and comes with almond butter, giving it a distinct, creamy texture.

Raaka makes a special ‘green tea’ dark chocolate which uses a generous amount of cocoa butter and 66% cocoa solids along with a dash of quinoa.

They steep the green tea with cocoa butter to extract the flavors and antioxidants, giving you one uniquely healthy bar of chocolate.

The vegan chocolate bars made by Evolved are ethically-sourced and certified organic by the USDA.

Evolved has a range of chocolate bars you can choose from, and they even make milk chocolate by replacing dairy with cashew milk.

No Whey! prides themselves on making clean, allergen-free goodies and sweets. Their ‘Milkless’ chocolate bar is made using cane sugar and cocoa butter, and thanks to their expertise, the Milkless bar is creamier than most other chocolates you’ll ever taste.

The ‘Absolute Black’ from Montezuma claims to contain almost 100% cocoa, combined with almond and sea salt.

This unique combination of flavors is packed into a bar containing less than 1 gram of sugar, making this chocolate a reasonably healthy dessert or snacking option.

If you’re vegan, dark chocolate is one treat you never have to give up as there are so many options available today, and many bars are even vegan by default.

And if you haven’t already, consider getting off milk chocolate and switching to dark chocolate instead. The rich cocoa offers more nutrients, and by avoiding non-vegan ingredients like milk and honey, you’re also doing the animals and the planet a huge favor.

Dove dark chocolate is not vegan because it contains dairy milk fat.

No, Ghirardelli dark chocolate is not vegan because they are made with with milk fat.

Kit Kat dark chocolate wafers are not vegan because they include milk and milk fat. You can see the ingredients list here.

Most ice creams including dark chocolate ice cream are not vegan because they are made with dairy cream. However, there is an increased demand and supply of non-dairy ice cream on the market now.

Yes, Lindt 70% Cacao dark chocolate is vegan and does not contain animal ingredients.

No, Lindt 60% dark chocolate truffles are not vegan as they contain milk ingredients.

Trader Joe’s dark chocolate is vegan. But make sure to continue checking the ingredients label as they have multiple flavors.