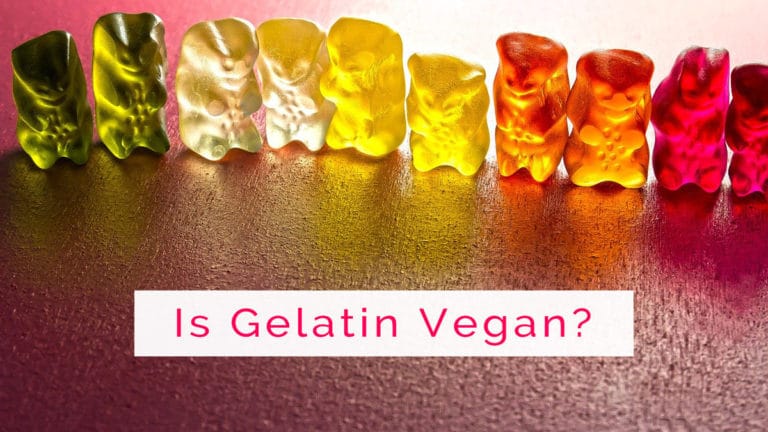 Gelatin is not vegan because it is made from animal by-products: boiled skin, bones, cartilage, tendons and/or ligaments from animals such as cows, pigs and fish. Fortunately, there are vegan-friendly substitutes for gelatin.

During my weekly visit to my friend’s house last week, my friend’s sister who was visiting for a few days made vegan blueberry cheesecake for me. Such a sweet gesture I thought to myself.

As I was eating the cake, my friend blurted, “We added some gelatin to make the cashew-based cheese firm.” Outwardly, I just smiled. Inwardly, I went “Say what? Can vegans eat gelatin?”

It got me thinking. Is gelatin even vegan?

What Is Gelatin, Where Does It Come From, and Why Do We Use It?

Gelatin is used in almost everything from Jell-O, marshmallows, shampoos, face masks, and photography items to name a few, due to its unique gelling, thickening, stabilizing, and binding qualities. In fact, the word ‘gelatin’ comes from the Latin word ‘gelatus’ meaning ‘jellied, or froze’. The use of gelatin goes back thousands of years to the Egyptian times—traces of gelatin were found in the form of glue in a pharaoh’s grave. Basically, gelatin is a colorless, tasteless substance which is protein made from collagen.

Collagen. Sounds familiar doesn’t it? Yes. It’s in our skin, and some of us probably use collagen masks and creams for healthier and suppler skin. Collagen is the type of protein that humans and animals have most in their bodies and plays important roles from providing structure to skin and helping blood clot. It is one of the major building blocks of bones, skin, muscles, tendons, and ligaments. Hmm… as a vegan, this doesn’t sound promising.

Gelatin is basically a protein obtained by boiling skin, tendons, ligaments, and/or bones with water.

The earliest record in the gelatin making process hints at the method of boiling down scraps of animal skins and bones, to release threadlike hydrolyzed collagen to make glue to stick and bind things like adhesives used in cave-paint. Gelatin based recipes using pig’s ears and feet date back to the early 1400s and was considered a symbol of culinary finesse.

Nowadays, gelatin is usually made from pig skins, bovine hides, beef and porcine bones due to its high concentration of raw collagen. These raw materials are by-products of the meat industry. Some argue that gelatin production is sustainable and part of a circular economy as it prevents wastage of these raw materials which would otherwise be thrown into landfills.

Environmental sustainability and circular economy aside, gelatin is clearly made from animals. In the conventional sense it would seem that gelatin is not vegan. However, one can argue that gelatin can be vegan, depending on why one is vegan.

If you fall under number 1, and 2, then gelatin is definitely not vegan. Stay away from all products with gelatin, foods and non-foods.

If you fall under number 3, there may be a case that gelatin is okay to be eaten or used as it is a byproduct of the animal. The animal was NOT purposefully harmed to make gelatin, which kind of makes sense.

If you fall under number 4, there may a case that it is okay to consume or use products with gelatin: the animals were not harmed in the gelatin making process, animal byproduct is not the root cause of animal agriculture, and if the byproducts are not used, they’ll end up in landfills causing land pollution, water contamination, and increase carbon emissions.

However, the reason one becomes vegan is never really clear cut. We may be a combination of the above or more. After all, we are unique beings intersecting in many ways.

To be safe, vegan or want-to-be vegan, stay away from all products with gelatin.  There are so many non-food products that do not use gelatin. But when it comes to food, what vegan alternatives are there?

There are plenty of vegan gelatin substitutes. Many companies and brands offer vegan-friendly replacements. Below, a few of them are listed.

Pectin is a type of starch that naturally occurs in the cell walls of fruits and vegetables giving them structure. It is both naturally and commercially produced. For commercial production, citrus rinds are usually used to make pectin.

Use for: Pectin is commonly used in jams and jellies.

Origins: The use of pectin dates back to the end of the medieval era. Pectin was used instead of gelatin in jelly-type foods.

Good to Know: Thus far there has been no reports of harm to animals, the environment, and humans in or around the process of producing pectin.

Agar-agar (or also known as kanten in Japanese) is obtained from red seaweed. Agar agar has been used throughout Asia to make desserts. It is also used as a vegan gelling and thickening agent. Agar agar is said to be stronger than gelatin and is more firm than ‘wobbly’.

Use for: Agar-agar can be used in jelly, jams, panna cotta, Jell-o shots, any gelatin-based foods. It is also used in laboratories as a culture medium.

Origins: The discovery of agar-agar was by accident in Japan around 1660. Since then, seaweed-based jellies became popular throughout Asia, especially in the climates of South East Asia.  The word agar agar comes from the Malay word for red seaweed.

Good to Know: Based on a report by the Italian Association of Chemical Engineering, the production of agar agar does not harm other animals and the environment. There are no reports that humans are negatively impacted.

Carrageenan is obtained from red seaweed known as Irish moss, which is found in abundance around the British Isles and can be found in some parts of Europe and at the North Atlantic coast of North America. Carrageenan is added to thicken, emulsify, and preserve foods and drinks.

Use for: Ice cream, jelly, panna cotta, yogurt, condensed milk, beer, nut milks, meat products, any gelatin-based foods. Where agar-agar is used mostly in sweet foods, carrageenan can be used in savory foods too. It can be used as a firming agent for vegan cheese.

Origins: The use of carrageenan goes back to about 400 AD in Ireland.

Positive Impact: The production of carrageenan has contributed to the livelihoods of smallholder farms and is extremely beneficial for the environment. The Irish moss is said to be environmentally sustainable and nutritious. The seaweed absorbs carbon dioxide, nitrogen, and phosphorus in the ocean and the Irish moss is an attractive habitat and food source for new life—like fish and invertebrates. Planting Irish moss regenerates barren area, as well as enhancing and restoring the coastal ecosystem.

Controversy: There has been a lot of noise when it comes to carrageenan, mainly the controversy surrounding the health effects of carrageenan. Evidence suggests that carrageenan triggers inflammation, gastrointestinal ulcerations, and that it damages your digestive system.

Just be cautious when buying carrageenan in the supermarkets—read the labels (I am sure as a vegan I didn’t have to tell you that).

There are no reports that other animals and people working in and around the production of carrageenan are negatively impacted.

Gelatin is not vegan. There are plant-based alternatives from different geographies and cultures, which can be used and do not cause harm to the Earth, animals, and humans. Woo hoo.

When eating out, be mindful to check the ingredients. It will reduce our dessert choices, but there are more vegan choices in the market now and I believe it will not stop expanding.  Just a reminder, it is ok to fail and make mistakes. I have many times. But just go back to the practice and over time, you won’t even think about being anything else other than a vegan. Also remind yourself of what veganism means to you.

Knox gelatin is not vegan because, like most gelatin products, it is made from bones, skin or connective tissue of animals.

Gelatin is not considered vegetarian because animals were slaughtered in the process of making it. Animal by-products are used in the production of gelatin.

1 thought on “Is Gelatin Vegan? Everything You Must Know”