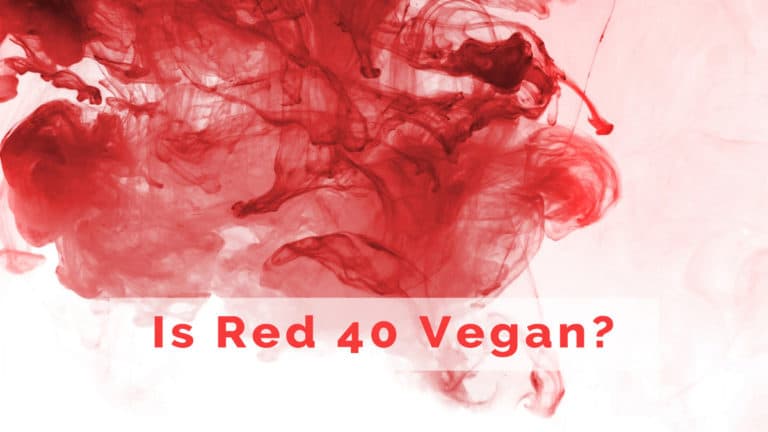 Red 40 is not vegan. Even though it does not contain animal ingredients and is plant-based, it is sometimes tested on animals.

Red Dye is a commonly seen word under the ingredients of our favorite candies like Jolly Rancher, M&Ms, and many other colorful red candies. It is also used in Jell-O, cookies, pickles, sauces, ketchup, cosmetics (from lipstick to toothpaste), soda, prescription drugs, and many others to give the product its bright red color.

Although Red 40 may sound harmless and plant-based, is it really vegan, and is it safe for humans to consume?

Red Dye 40, also known as Red 40 or Allura Red, is a colorant used in food, prescription drugs, and cosmetics. Previously made from coal, Red 40 is a man-made product, now made from petroleum (a by-product of the oil industry) and chemicals harmful to nature — the environment, animals, and humans.

In the process of turning crude oil to gasoline, distillates of petroleum are formed. These petroleum distillates are the by-product of this process. They are collected, sent to labs, and mixed with chemicals to create synthetic dyes. Red 40 is one of these, as well as Yellow 5, Yellow 6, Blue 1, to name a few.

Some of the everyday food products that contain Red 40

There are many more food products that contain Red 40. Always check the ingredient label. As mentioned above, Red 40 can also be found in cosmetics. It can cause severe allergies from breakouts, itching to burning sensations on the skin.

The Food and Drug Administration (FDA) in the United States has approved the use of Red 40 in foods and beverages. They require manufacturers to list the artificial dyes used on the product labels. The amount of Red 40 that can be used is not regulated, though.

Across the pond in the European Union (EU), the use of Red 40 has been approved too. Manufacturers are required to list the artificial dyes used on the product label, similar to the FDA. In addition to that, manufacturers selling in the EU must print a warning on labels of foods that contain the Dye, alerting consumers that the foods may cause hyperactivity issues in humans after consumption. This, however, is not practiced in the United States. The warning is stated as: “May have an adverse effect on activity and attention in children.”

Despite the Dye being approved in the EU and its stricter requirements, several countries within the EU have banned the use of Red 40 due to safety issues.

Regardless if it’s approved by the authorities or not, Red 40 is a synthetic product, not naturally occurring on Earth, hence not natural to us.

It was ironically created to replace other more harmful colorants that were used before its invention. Studies have shown that Red 40 can be harmful. Some side effects of Red 40 include hyperactivity, allergy, migraines, learning impairments, irritability, breakouts, and itching.

More dangerous than its side effects are the contents used to create Red 40. Benzidine, 4-aminobiphenyl, and p-Cresidine are some of the chemicals added to make this Dye, suggesting that the Dye is a potential carcinogen. Benzidine is an unnatural manufactured chemical used in the past to dye cloth, rubber, leather, and paper. Benzidine sales were stopped in the mid-1970s and are no longer used in laboratories and the paper or rubber industries. It is recognized as a carcinogen by the National Cancer Institute, hence why it has been removed from the industry and the consumer market place. The same goes for 4-aminobiphenyl and p-Cresidine.

Hence, it is DEFINITELY NOT safe to consume.

Sometimes Red 40 is listed under a different name.

Here’s a list of all other names of Red 40

Up to this point, we have covered that Red 40 is plant-based, but is it vegan? Unfortunately, it is not due to the following reasons:

Red 40 is not vegan, and it is best to steer clear of products that use Red 40.

Are There Natural Alternatives to Red 40?

Thankfully, we can learn from our ancestral and indigenous practices and use natural dyes instead when baking, cooking, or even dying cloth. Cavemen used natural dyes to paint. Some natural alternatives for red coloring include strawberries, purple carrot, elderberry, purple sweet potato, beetroot, pomegranate juice, or hibiscus flowers steeped in a bit of hot water (which is then cooled). Mixing a few of the ingredients will give you the red color you desire.

You might also come across the natural red dye carmine (or sometimes known as cochineal), which is not plant-based nor vegan. Carmine is dried and crushed female bodies of the cochineal insect. It is sometimes also listed on labels as natural red 4, cochineal extract, carmine lake, or crimson lake.

As we become conscious consumers, the thought of putting something unnatural or unkind into or on our bodies may irk us. It is tiring to continually watch out for and scrutinize what we buy, eat, or slather on our skin.

The more we empower ourselves, families, friends, neighbors, and others to learn more about every single item listed under Ingredients, the more we can shift the way companies manufacture their products.

As per the book’s title by nutritionist Bonnie Taub-Dix, “Read It Before You Eat It” — make this your mantra.

For now, the best thing to do is eat as natural as possible, shop at farmers’ markets or at the independent regenerative shops. If you are craving candy, search for naturally made or toxic-free candies such YumEarth Organic Pops, Justin’s Dark Chocolate Peanut Butter Cups, to name a few. Or you can just take a bite into the juicy red apple.