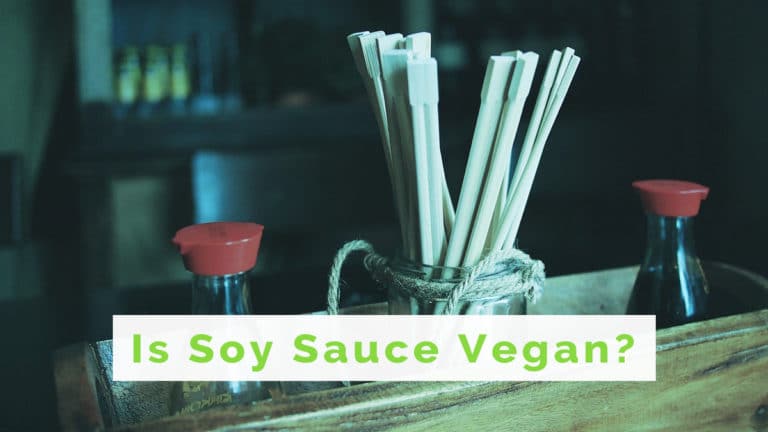 Soy or soya sauce is vegan. It is often made from soybeans, wheat, salt and water.

The meat and dairy industry has, for decades, tried its best to make the consumption of vegan alternatives like soy, seem like an unnatural and unhealthy process.

And considering the stigma surrounding veganism, it’s been relatively easy for them to convince people.

The assault on soy and soy products for being unnatural and high in estrogen has contributed to the development of a significant number of myths.

Take, for example, the myth that consumption of soy leads to the development of breasts in men. This widespread belief was fuelled by the fact that soy contains a compound known as isoflavones, which behaves a lot like estrogen. The idea was that men consuming too much soy would increase their estrogen levels, which would lead to the growth of breasts.

But our understanding of isoflavones has come a long way. Recent studies have demonstrated that there is no correlation between the consumption of soy and the development of breasts in men.

And this is just one of the many myths surrounding the consumption of soy products. As we continue to learn more about soy, we can understand its health benefits and start integrating this ingredient into our diets.

We know for a fact that whole food soy products, like tofu, edamame, and miso, are entirely vegan.

But when it comes to processed soy products, there’s still a lot of debate regarding whether they’re vegan or not.

For example, certain manufacturers producing soy nuggets use milk as an ingredient to make the nuggets softer or sweeter. If this is the case, then, of course, the soy nuggets concerned will be non-vegan.

On the other hand, soy sauce is entirely vegan simply because the ingredients used to make it are derived from plants.

The confusion about soy sauce being vegan is that one of the most popular soy sauce manufacturers, Kikkoman, was accused by PETA for testing their products on animals. When vegans found out about this, they decided to stop buying Kikkoman soy sauce. But of course, the accusation led to many vegans wondering whether soy sauce was vegan at all, and many decided against consuming it.

However, in 2015, Kikkoman publicly stated that they had stopped testing their products on animals. And while most soy sauces, including theirs, contain preservatives and additives, they are completely vegan.

What is Soy Sauce Made From?

An agent such as lactic acid or koji is used in the fermentation process of the soybeans. And while most manufacturers use a specific method of obtaining soy sauce, here is usually what happens:

Of course, the ingredients and process vary slightly based on the manufacturer. Some use additives, preservatives, or coloring for certain flavors. These modifications can give the soy sauce an entirely different taste depending on what proportions are used.

What About Lactic Acid?

Certain soy sauce bottles will have lactic acid mentioned in the ingredient list on the back. This can get confusing as the word lactose is usually used to imply the presence of milk products. As such, it’s quite natural for most people to imagine that lactic acid comes from milk and is hence non-vegan.

However, lactic acid is a type of bacteria used for fermentation, just like yeast. Individual companies use lactic acid to speed up the fermentation process and give the final product a certain depth of taste.

Lactic acid is derived from carbohydrates, like corn syrup. Hence, even when lactic acid is used to manufacture soy sauce, the end product is entirely vegan.

What About the Fishy Taste?

Many of the premium soy sauce products in the market have a distinct fishy or oceanic taste. And several soy sauce aficionados seem to have confirmed this taste.

The flavor is so strong in some brands that it’s hard to imagine that the product hasn’t been derived from fish or other marine animals.

However, you may want to be wary of certain soy sauce products that use sugar as one of the ingredients. It’s best to contact the manufacturer and determine whether this sugar is palm sugar or derived from bone char. The latter is often considered non-vegan, and hence soy sauce products with this ingredient aren’t suitable for all vegans.

The high sodium content in soy sauce is a serious cause of concern for nutritionists and fitness enthusiasts. Too much sodium in the body can result in increased blood pressure, which leads to a host of other problems.

However, when consumed in moderation, soy sauce has a few health benefits:

The fermentation process of soy sauce helps create a unique carbohydrate called oligosaccharides, which is beneficial to the digestive tract.

The microorganisms involved in the fermentation process contain enzymes that break down the unique fibers found in soybeans. When these fibers are broken down by this method, oligosaccharides are produced.

Oligosaccharides help to foster the growth of friendly bacteria in our large intestine. Not only does this make for more effective nutrient absorption, but this beneficial gut bacteria also helps to remove waste efficiently.

2. Helps to Lower the Occurrence of Allergies

Because multiple people are allergic to soybeans, you’d think that a product like soy sauce would lead to more allergies.

But surprisingly, the reverse is true. Firstly, the allergy-triggering compounds in soy are broken down during the fermentation process. Once these proteins have been broken into smaller parts, they are no longer capable of triggering an allergic reaction.

Secondly, soy sauce also contains another unique carbohydrate that is released during the fermentation process – polysaccharides. This carbohydrate reduces the activity of an enzyme known as hyaluronidase. When this enzyme is stable, everything works smoothly. Still, increased activity in this enzyme leads to inflammation and a subsequent increase in the likelihood of an allergic reaction. The polysaccharides in soy sauce help reduce the possibility of an allergic reaction by controlling this enzyme activity.

3. Source of Antioxidants and Protein

The fermentation process aids in the release of a variety of antioxidants that are incredibly beneficial to the body.

Antioxidants help combat oxidative stress and neutralize free radicals in the body. Free radicals cause tissue damage and lead to poor health and aging over time. A regular supply of antioxidants is necessary to keep the body in balance.

While soy sauce isn’t filled with protein, it is ranked in the top ten foods with the highest protein density. This means that to absorb one gram of protein from soy sauce requires far fewer calories than absorbing protein from most other foods.

These are just a few of the benefits that soy sauce offers to those who consume it regularly. Of course, too much soy sauce in the diet can lead to other complications, as mentioned earlier. But a moderate amount can help to balance out the body and provide it with essential nutrients.

Of course, to make the most of the benefits that soy sauce has to offer, it would be advisable to try out the organic, non-GMO soy sauce. And while it is a little rarer, it’s not impossible to find.

The best part about soy sauce is that it’s so adaptable and can really add that extra zing to a large variety of dishes.

And now that you know it’s completely vegan and even offers a few important health benefits, you can consume it with a much clearer conscience.

Yes, Amoy soy sauce is vegan. It is typically made from soyabeans, wheat, salt and water.