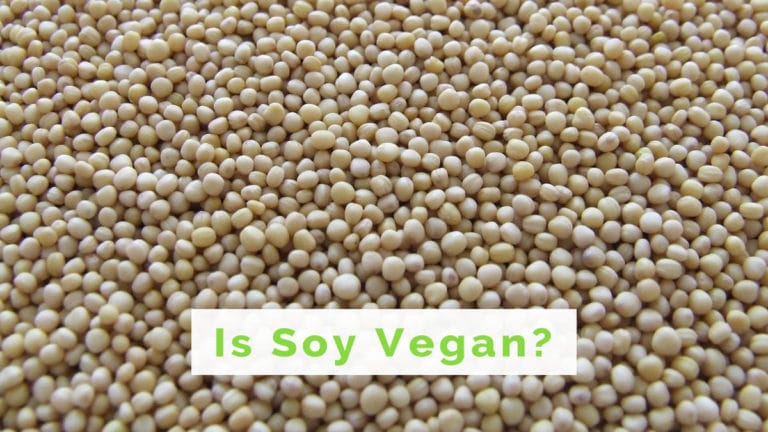 Soy is vegan because it is a legume. Most products made with soybeans are meant to be plant-based and vegan-friendly such as tofu, soy milk, and tempeh.

The reasons soy is controversial is due to two main factors:

Soy foods are made entirely from soybeans, fermented or otherwise, and as a result, soy products are 100% vegan.

In the case of some processed foods, certain manufacturers tend to add dairy to the product. But it’s an unnecessary ingredient, and soy products are intrinsically vegan unless mentioned otherwise.

Is Soy Bad for You?

Before delving into the benefits and drawbacks of soy, it’s important to state that all soy products are not made equal. In fact, processed soy products, like soy nuggets or soy cheese contain additives and preservatives that can actually be harmful to the body. But this isn’t applicable only to soy; processed foods made from any source tend to be harmful to the body when consumed in excess.

So as such, processed soy, if consumed in excess is just as harmful as every other packaged food product out there.

But when eaten in moderation, whole-food soy products, like tofu, tempeh, and soy milk, can actually improve your overall health.

The myth that protein comes from animal products has been debunked for a while now, but people still believe it’s difficult to get their daily protein requirements from a plant-based diet.

Well, add soy to your diet and you won’t have to worry about protein. 100 g of firm tofu contains roughly 17.6 g of protein; a significant part of the required daily protein intake. Protein is what helps to boost muscle growth and tissue repair, and including soy in your diet every few days can help with that much-needed recovery.

When consuming protein, it’s not really the amount of protein you put into your body but the amount your body is able to absorb. And soy also helps maximize your protein absorption thanks to the fact that it’s rich in fiber.

Being rich in fiber, moderate consumption of soy can actually help promote a healthier gastrointestinal system and improve nutrient absorption. Fiber also helps to excrete toxins and waste substances from the body by improving bowel movement.

Soy is a rich source of polyunsaturated fatty acids, especially omega-3 fatty acids which are essential to both cognitive and cardiovascular health. Most people assume that it’s difficult for vegans to get omega-3 as most supplements are made from fish oil. However, most whole-food soy gives our bodies the required quantity of omega-3 acids.

4. Source of Minerals and Vitamins

Soy is rich in B-vitamins, iron, and zinc, and packed with antioxidants; a combination of nutrients that can be hard to obtain from a single food source. The antioxidants in soy help to fight free radicals in the body—unstable compounds that, if left unattended, can cause damage to cells.

Recent studies have found that women who consume soy products after menopause actually experience improvements in their bone health and density. Moreover, soy is rich in isoflavones, a compound that mimics estrogen and binds with estrogen receptors in the body. Studies have shown that eating moderate amounts of soy on a regular basis can actually help regulate metabolic activity in older, post-menopausal women.

These are but a few of the many health benefits that soy and whole-food soy products have to offer. Research into the consumption of soy continues and scientists are uncovering more and more health benefits about soy as the years go by.

And yet, why are many people of the opinion that soy is harmful?

Well for starters, consuming large quantities of processed soy products on a regular basis can lead to physiological complications. However, large quantities differ based on the consumer and the type of soy product being consumed, along with the health factors involved and the regular diet of the person concerned.

However, interested parties, like the meat and the fitness industries, tend to amplify the negative effects of soy by highlighting a few deviant cases. This misinformation has, of course, urged people to stay away from soy and soy products. Over time, this misinformation has led to the formulation of a few myths. Let’s take a look at two of the most popular ones.

This myth is largely due to the fact that soy contains compounds called isoflavones or phytoestrogens which act like estrogen and combine with estrogen receptors in the body. But the effect that phytoestrogens have on the body is much weaker than that of estrogen.

In fact, a review of nearly 15 studies testing the relationship between male hormonal imbalance and soy found that up to 70 g of soy per day and 240 g of isoflavones per day had no effect on testosterone production or levels.

In fact, regular consumption of soy may even reduce the risk of prostate cancer in men.

2. Soy is Linked to Breast Cancer

The presence of isoflavones (phytoestrogens) in soy also led scientists and nutritionists to believe that consumption of soy may be linked to breast cancer. But the mere presence of estrogen isn’t enough to lead to a complication like breast cancer.

A study of Asian women showed that those who consumed soy on a regular basis had a much lower risk of triggering breast cancer. A similar study done with Western women found that the soy they consumed had no effect on their chances of contracting breast cancer.

The difference may be attributed to the fact that the Asian diet includes more whole-food soy products which are healthier for the body.

And while soy does contain phytoestrogens, it’s also rich in other nutrients including potassium, which helps to flush toxins out of the system. A body that receives all the necessary nutrients is unlikely to fall into a state of disease, and adding soy to your diet can help ensure you’re getting the right nutrients.

These are two of the biggest myths linked with soy and have been perpetuated for years. And without adequate research to disprove the claims, it has been difficult to debunk these myths. But as of today, research has shown that the harmful effects of soy have been amplified out of proportion. Soy is essentially harmless and, in fact, consumed in moderation, a rich source of nutrition, and highly beneficial for the body.

Aside from its nutritional value, soy is also an extremely versatile ingredient, capable of being turned into a variety of different things. Vegan meat, vegan cheese, tofu, tempeh, bean paste, soy sauce, and teriyaki are a few of the more popular soy-based products in the market.

And while mock meats and other vegan alternatives aren’t the healthiest foods out there, they’re free from saturated fat and cholesterol making them healthier than their non-vegan counterparts.

Soy has only recently gained popularity due to its use in making plant-based alternatives and the research that’s been debunking the myths surrounding its negative impact on health.

The bad reputation that soy-products managed to build up is primarily due to a lack of research and the widespread belief that plants could not give us adequate protein. When a product like soy claims to provide enough protein, it’s easier for the masses to accept the information if they’re also told that there are negative impacts of consuming it.

But whole-food soy products can really improve your nutritional profile and enhance your state of health. And the best part is, it’s completely vegan! So, if you’re looking to lead a healthier lifestyle, consider adding soy to your diet.

Soy (soybean, soya bean) is vegan and can be consumed on a regular basis. And as long as the soy agriculture industry, and more specifically, individual business that cultivate soybeans, produce soy in a sustainable way, then soy will remain vegan-friendly.

Yes, soy burgers are vegan as long as the food manufacturer didn’t add any animal ingredients or byproducts. They’re usually made for plant-based diets.

Generally, soy candles are vegan because no animal products are used in the manufacturing. You’ll want to make sure the candle wax is 100% soy-based and no animal derivatives were added.