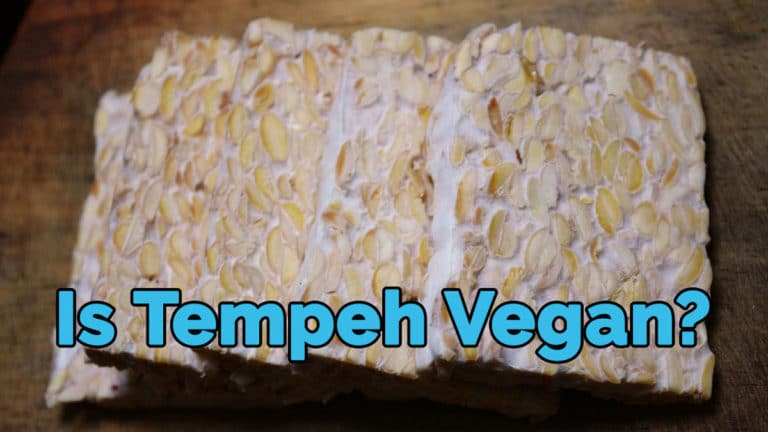 Tempeh is a vegan, soy-based fermented food. It does not contain any animal ingredients.

Lately, the vegan population has been growing at an alarming rate. Thanks to increasing awareness of the benefits involved, both personally and to the planet as a whole, more people finally see sense in switching to a plant-based diet.

And along with this change, there’s been a sudden spike in demand for plant-based foods. Today, you’ll find regular grocery stores offering various vegan milk, plant-based ice creams, and mock meats, among other vegan foods.

But even now, many who turn vegan are looking for meat alternatives to satisfy certain cravings. While mock meat has slowly become popular, the fact that it’s processed has prevented many from making it a regular part of their diet.

Tofu is another popular meat alternative that many have included in their lives. While it’s quite versatile, it lacks both the texture and taste that characterizes certain meat dishes.

However, one meat alternative can replicate the texture and taste of non-vegan dishes with astonishing accuracy. We’re talking about tempeh, and while it may not be as popular as tofu, tempeh offers a much wider range of possibilities.

Like tofu, tempeh is a fermented soy food, unique for its texture, flavor, and versatility. It is believed that tempeh originated in Indonesia and spread to other Asian countries and the West.

And while the rest of the world may not know about it as much as tofu, it’s still the most popular fermented soy food in Indonesia.

How Is Tempeh Made?

Tempeh is made by cleaning soybeans and soaking them in water overnight, making it easier to remove the hulls encasing the beans. The beans are then boiled for thirty minutes, during which time the hulls tend to peel away and can be easily removed.

The excess water is then drained out, and the beans are placed in a tray along with a special fungus known as Rhizopus oligosporus. This fungus is widely used as a starter culture for tempeh production, both industrially and at home.

The beans are then allowed to ferment at room temperature for nearly two days. Alternatively, the beans can be placed in a room with a temperature between 30 °C and 32 °C and left to ferment for 20 hours. Each method of fermentation changes the nutrient composition of the tempeh a little, but the result is quite similar, and both methods are used industrially.

During the fermentation, the fungus grows and produces a fluffy, white mycelium, which spreads over the beans, binding them together to create a solid sheet.

This sheet is then cut into slices of varying lengths and often sold on the same day since tempeh is a perishable product. However, tempeh can be stored for future use if it is dried or frozen before consumption.

Tempeh is vegan because it is mainly made from soybeans.

Tempeh, on its own, is mildly savory, with a nutty, earthy flavor, not unlike mushroom.

When cooked, tempeh can be imbued with various spices and elements to recreate any meat dish. The best part about tempeh is that it retains its texture and shape even when cooked and is an excellent absorbent, making it intensely flavorful when cooked properly.

This makes tempeh the ideal meat replacement for any dish; in fact, you can even make tempeh taste like bacon or sausage.

On the plus side, this meaty taste comes without any saturated fats, cholesterol, and other toxins usually found in regular meat. Moderate consumption of tempeh can be a healthy and nutritious addition to your diet. Here are a few health benefits you can enjoy by simply including tempeh in your diet.

A single cup (160 gms) of tempeh contains up to 30 grams of protein. This makes tempeh the ideal snack for those looking to build muscle or even supplement their workouts with a proper diet.

Another benefit of tempeh is the high protein content aids in thermogenesis, which increases heat production in the body. This increases the metabolic rate of the body, allowing you to burn more calories after every meal. As such, a regular diet of tempeh has been shown to aid in weight loss by both burning fat and increasing muscle mass.

Additionally, adding tempeh to your diet helps you stay full and satiated for long periods of time, making it less likely to want to snack between meals.

Tempeh is also rich in antioxidants, which are necessary for preventing oxidative stress in the body.

Free radicals are atomic particles in the body that can wreak havoc on our physiological systems. Poor diet and environmental factors lead to the formation of free radicals in the body, and these compounds damage the cells. This damage is known as oxidative stress and leads to a variety of problems, including skin aging, balding, lower energy levels, and poor digestion.

The antioxidants in tempeh help eliminate oxidative stress by neutralizing the free radicals in the body, preventing them from negatively impacting our systems.

Tempeh is also rich in soy isoflavones, a type of antioxidant that helps regulate hormone activity. Scientists have been studying isoflavones for years now and have found many benefits that come from increasing our intake of this compound.

Isoflavones have been found to prevent and even fight certain types of cancers, help women maintain estrogen levels during menopause, and even increase testosterone production in men.

As tempeh is essentially made from soybeans, it’s rich in fiber, which helps the body absorb nutrients from the food we eat more effectively.

However, including tempeh in your diet can help improve digestion on a whole other level. Due to fermentation, tempeh is rich in prebiotics — a type of fiber that improves the health of the bacteria in your gut.

This bacteria is responsible for absorbing nutrients and eliminating waste, and by supplying this bacteria with the right fuel, tempeh can help improve its efficiency.

The prebiotics in tempeh increase the production of short-chain fatty acids in the digestive tract, and these fatty acids are the primary source of energy for the cells in this region.

The presence of increased fatty acids gives your cells more energy to work with and supports the growth of more beneficial gut bacteria, improving your overall digestive health.

While the dairy industry claims that milk helps to grow stronger bones, there are a few inconsistencies in this statement as milk has been found to lead to weaker bones over time.

Unlike dairy, tempeh can help improve your skeletal structure’s density and strength as it’s rich in several nutrients that are geared towards better bone health. Tempeh is rich in calcium, phosphorus, manganese, and copper, all of which are bone-building nutrients.

Calcium is the key structural component and makes up the building blocks of your bones. Phosphorus maintains the shape and structure of the skeletal system and aids in bone development. Copper improves and maintains bone density, and studies have shown that low levels of copper have been linked to decreased bone density. Similarly, manganese, when combined with these other nutrients, aids in bone mineral density and boosts bone formation.

Consumption of regular meat products has been linked to an increase in cholesterol levels because the animals being consumed add to the cholesterol in your body. However, since tempeh is plant-based, there is no additional cholesterol entering your body with its consumption.

What’s interesting is that the isoflavones in tempeh help lower levels of LDL (bad cholesterol) in the body. This helps keep your liver, and your heart functioning optimally and regulates cholesterol levels in the body.

Tempeh Is The Way

If you’re missing the taste of certain meat dishes after going vegan, tempeh is one ingredient you should really consider including in your life. It can be baked, stir-fried, grilled, sliced into steaks, skewered, and even pan-seared for a variety of different recipes.

Thanks to its texture and thickness, and the ability to easily absorb flavors, tempeh makes for the perfect replacement when preparing traditional meat dishes.

So if you’re looking to include a new meat alternative into your life, consider adding tempeh to your diet. As you can see, aside from great taste, it offers many health benefits that are absent in non-vegan dishes.

And additionally, you get the benefit of eating a meaty dish without harming an innocent being. And for those of us looking to protect the animals and the planet at large, that’s a trade-off you’ve got to love.