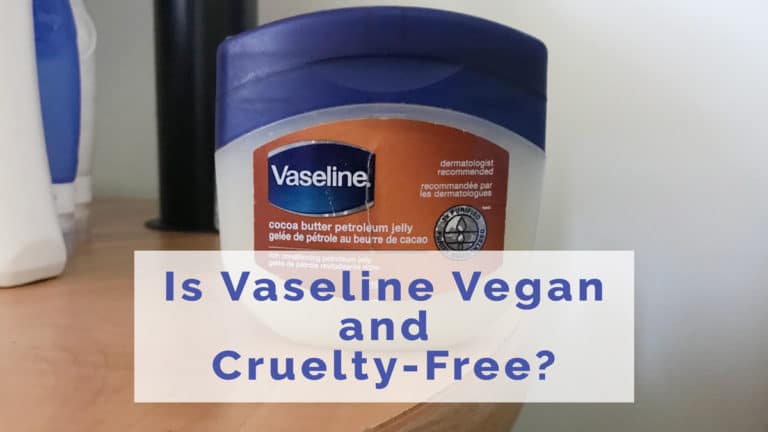 Traditional Vaseline is vegan and is considered cruelty-free because it is made entirely from petroleum jelly. Vaseline’s other moisturizers, such as their Intensive Care Lotions, may not be vegan because they contain glycerin, an ingredient sometimes derived from animal fats or plants.

The concept of veganism encompasses more than just the food we eat. It refers to a lifestyle that aims to minimize cruelty towards animals by staying away from products and practices that exploit them in some way. This requires a gradual awareness of the products we consume daily and research whether these products are tested on animals or contain animal ingredients.

And it’s quite surprising how many of our daily products use animals in some part of the manufacturing process. Take, for example, lotions, creams, and balms. They may seem cruelty-free at first glance, but some of these products are tested on animals, and some use non-vegan ingredients, like gelatin.

Vaseline is one of the most popular petroleum jellies in the world, and it’s used to moisturize, relieve itchiness, and help wounds heal quickly, among other purposes.

In essence, Vaseline is entirely vegan as it does not contain any animal ingredients and is made entirely from petroleum jelly and a few other minerals. But it gets a little more complicated than that.

Vaseline is owned by Unilever, a parent company with numerous suppliers working under them, including Magnum, Axe, and Knorr. And while Vaseline itself does not use any animal ingredients or test on animals, a few of the other companies under Unilever, and Unilever itself, have been known to test their products on animals.

Recently, however, Unilever announced that they would stop testing their products on animals. But they cannot claim the same for the companies operating under them. Certain subsidiaries test ingredients on animals in order to comply with legal and statutory requirements in specific markets.

Additionally, some governments test some of Unilever’s products (even Vaseline) on animals before distributing them to the market. If you’re in a country that mandates testing of certain products on animals, the Vaseline sold in that country could very likely be tested on animals before sale.

Another reason some vegans stay away from Vaseline is that the product uses petroleum jelly as its main ingredient.

Petroleum jelly is a mix of minerals and waxes and does not contain any non-vegan ingredients.

However, it does contain scarce fossil fuels, and the mining of fossil fuels has a harmful impact on the environment.

By strict definition, this does not make Vaseline non-vegan as animals aren’t involved in this process. But some vegans extend their compassion to the environment, and to some of them, using Vaseline is unethical.

Is it Alright For Vegans to Use Vaseline?

The first complication can make it seem like Vaseline is a non-vegan product. While Vaseline is vegan, it comes from a parent company with suppliers who may test their products on animals.

While this may seem like enough reason to eliminate Vaseline from your life, it’s illogical to stay away from the product simply because of Unilever.

Think about it. When you go to buy groceries, do you shop at a vegan grocery store? Should you boycott your favorite vegan dish at a particular restaurant merely because it also serves non-vegan dishes?

Most of the products or food we buy are sold by the same suppliers who market non-vegan products. It would be nearly impossible to get everything you need if you avoid products because the company that sells them (or an associate company) isn’t strictly vegan.

There’s a positive twist to approaching veganism this way; an increase in demand for vegan products results in companies pouring more of their investments into animal-free manufacturing processes. And as the demand increases, it’s likely that companies will seriously consider focusing more on cruelty-free products to gain profit.

Let’s take the restaurant example again. If a restaurant starts serving 3 or 4 vegan dishes that attract many customers, they’ll consider investing in the creation of more vegan dishes to cater to the market. But if vegans choose not to visit the restaurant because not all the food they serve is vegan, the restaurant will stop serving vegan dishes as it seems like a waste and an unnecessary drain on their resources.

Unilever has even taken note of the controversy around Vaseline and why vegans don’t want to use it. They are becoming aware of the fact that they need to cater to a broader market, one in which there are far more vegans than ever before, and they’re taking steps to do the same. In their own words:

While it may take a few years, Unilever is aware that they may lose out a large chunk of the market share unless they end animal testing across all their brands.

So, in essence, Vaseline is vegan, and by continuing to support products while at the same time demanding animal-free manufacturing processes, we give companies both impetus and an opportunity to change.

Most vegans use Vaseline frequently, but if you’re still not convinced, here are a few alternatives you can try out.

Coconut oil is perhaps one of the oldest moisturizers ever used and it’s still one of the most effective. Besides keeping your skin hydrated and speeding up the healing process, coconut oil also possesses antimicrobial properties that help treat acne and protect the skin. It’s known to prevent inflammation by soothing areas that are inflamed. Additionally, it’s full of nutrients that help to nourish your skin.

Aloe vera can be found easily in most backyards or gardens. It’s an excellent moisturizer and skin cleanser, offering your skin a host of nutrients. Aloe vera can also help treat more severe skin conditions like psoriasis and dermatitis.

Cocoa butter is extracted from the roasted seeds of Theobroma Cacao, a tree native to the Americas. Apart from moisturizing, cocoa butter forms a sort of protective barrier over the skin surface to retain moisture and keep the skin hydrated.

Cocoa butter is also a rich source of phytochemicals, a compound that occurs naturally in plants. Phytochemicals help improve blood flow to the skin surface, allowing the body to eliminate toxins while slowing down the aging process. Additionally, phytochemicals also help to protect the skin from harmful UV rays.

Shea butter is a vegetable fat obtained from the shea tree, native to East and West Africa. Shea butter contains a high concentration of fatty acids, including stearic and oleic acids. Combining these fatty acids and the rich mineral content of shea butter makes it ideal for rejuvenating the skin.

It also possesses anti-inflammatory and healing properties that can help the skin recover quickly after being exposed to the harsh weather for too long.

For centuries, olive oil has been used by people from various civilizations ever since humans figured out how to extract it from the Olive tree.

The best part about olive oil is that it’s easily absorbed by the skin and hence highly effective.

As it’s been elucidated, Vaseline itself is a completely vegan product without any animal ingredients, while its parent company, Unilever, is not completely vegan. Vegans may have slightly different moral standpoints when it comes to Vaseline, but in the end, it’s up to you to decide whether or not using Vaseline clashes with your ethical principles as a vegan.

And who knows, there may come a day when the non-vegan products sold by a company actually produce fewer profits than their vegan counterparts! It’s up to us as consumers to let them see that investing in veganism is worth their time and effort.