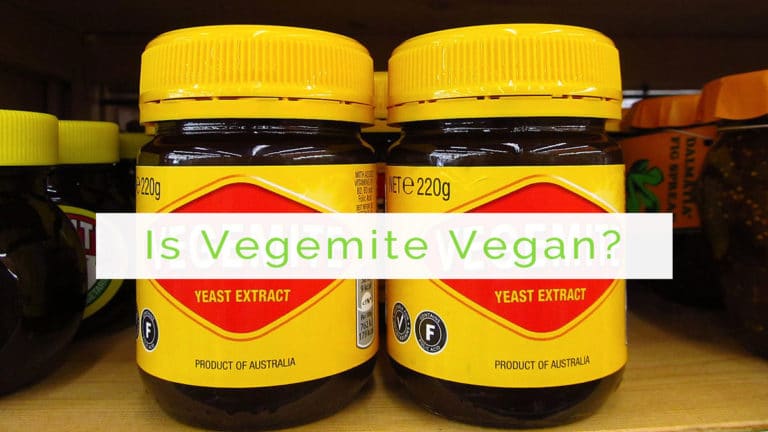 Yes, traditional Vegemite is vegan. It contains no animal products and is certified vegan in Australia. On the other hand, Vegemite Cheesybite is not vegan because it contains dairy.

Vegemite is an Aussie-branded paste that is usually spread on toast for breakfast. Vegemite is famous for its dark brown to black color and its thick tar-like texture. This flavor gets described to be salty, bitter, and has a potent taste of soy sauce. Many people across the globe describe the taste as sadness, and too tar-like.

Vegemite isn’t a spread for everyone’s flavor palette, but is considered a healthy source of vitamins and is low in calories. Vegemite is also a pure extract of vegetables made into a thick paste.

This beloved Australian spread is indeed vegan-friendly. Vegemite is a certified vegan product, one of 500 Australian products to be certified. You’ll find a few Vegemite products that have a certified badge on the back of the jar. However, if you’re a vegan who doesn’t approve of artificial colors, this may not be an option for you.

One great thing about this famous spread is that it didn’t need a recipe change as it was made with only plant-based ingredients. Unfortunately, not all flavors or alternatives of Vegemite are vegan.

Original Vegemite, Vegemite Gluten Free, and 40% Less Salt Vegemite are all vegan. Vegemite Cheesybite, as the name suggests, is not vegan because it contains dairy.

Vegemite is high in vitamin B, like riboflavin, thiamine, niacin, and folate. Vegemite is also known for its pungent flavor and tar-like texture. You’ll find only a few people enjoy this spread over bread or in meals.

Which Vegemite Alternatives Are Vegan?

It can be hard to confirm which Vegemite alternatives are vegan because not all brands have the certified vegan badge on the jars. But below is a short list on which are accepted to be vegan.

Vegemite is made since 1923 by the Fred Walker Company, which later became Kraft Foods Inc. In 1937, a limerick competition promoted the Vegemite product. This competition also had prizes such as Pontiac cars. In 1939, this Aussie-made staple got endorsed by the British Medical Association. This is where Vegemite saw sales grow. It was also used among patients for nutritional diets.

Before its famous name VEGEMITE, it was known as Pure Vegetable Extract.

Due to competition dominating the Australia market, Marmite, Vegemite wasn’t popular with the Australians. Vegemite then had a second name change to Parwill in 1928. Its name change was to help the rise in sales, but the plan was unsuccessful. Fred Walker later changed the name back to Vegemite 14 years later.

Fun Fact: During World War II, Vegemite was used in rations for the Australian Army.

Where to Buy Vegemite

You can buy Vegemite pretty much anywhere now. From your local supermarkets, to many retail stores. These stores would include Coles, Woolworths, Walmart, and Target. In America, Aldi; Morrisons in the UK. You can even find Vegemite jars sold on Amazon.

The ingredients mentioned above can differ between each Vegemite product.

Vegemite is a good source of calcium, magnesium, iron, potassium, and selenium. This Aussie-made spread is famously known to help benefit your eyesight, and strength. It promotes healthy skin, helps improve your digestive system, and boosts circulation of blood cells in your body.

Is Vegemite Good for You?

The most common method of using Vegemite in Australia is to have it with toasted bread and butter. You can substitute dairy butter for vegan butter. You’ll also want to spread Vegemite on your toast sparingly because its bitter taste can be overwhelming when too much is used.

Is this famous spread that all Australians love good for you? The answer is yes. Though it has its cons, Vegemite is said to be a health-benefiting paste. It’s how you decide to eat it, that could get you into trouble; such as white bread and Vegemite, this isn’t as healthy as opting for whole grain, wholemeal, or oat bread.

You need to also look out for the knock off brands of Vegemite. These may have fewer benefits and healthy ingredients. Marmite lacks vitamins B1, B2 and B9. Promite contains less vitamin B in general compared to Vegemite.

Keep in mind the original recipe for Vegemite does not contain vitamin B12.

Some more alternatives to Vegemite include Our Mate, Brekkie Mite, Mighty Mite, and finally Aussie Mite.

You can also try making your own vegan Vegemite as an alternative. This recipe roughly takes 5-10 minutes of prep time and no cooking time.

Try this simple recipe made with only three ingredients:

Directions
Combine and mix all the ingredients in a medium-size bowl. Place in the refrigerator for 1-2 hours and enjoy.

Vegemite is vegan and vegetarian-friendly. This spread should be tried by everyone since it’s part of Australian history and culture. Due to its health benefits, and vegetable properties, it can be used across many dishes including pastries.

Grab a slice of toast and cheers to a healthy body.