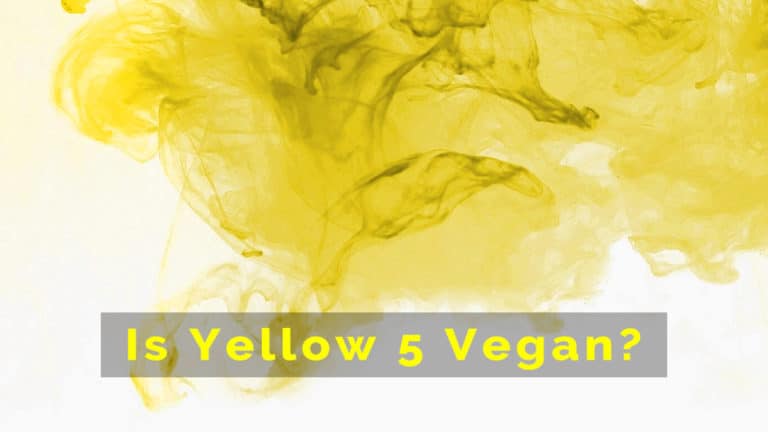 Yellow 5 is not vegan. This yellow food coloring does not contain animal ingredients and is plant-based, but it’s sometimes tested on animals.

In recent years, we have seen a change in health and lifestyle choices.

Like you and I, consumers are now more aware of the dangers of pesticides and many other unnatural chemicals and are opting for cleaner, healthier choices, not just for our health but also for the health of the environment, nature, and all other beings living on this planet. After all, if they are healthy, we are.

Consumers are also now becoming warier of food coloring used in our foods. Nielsen Group conducted a study in 2014 and found that more than 60 percent of US consumers stated that the absence of artificial flavors and colors is an important factor when purchasing foods.

We may think that by avoiding the usual junk foods, we avoid these artificial colors, but don’t be fooled; they can be found in things besides junk food.

Previously we covered the artificial color, Red 40. Today we will delve into Yellow 5, the color that gives Mountain Dew its unique hue or gives the ‘bright appetizing yellow’ to Kraft’s Mac & Cheese.

What is Yellow 5 and How Is It Made?

Yellow 5 is a synthetically-made colorant created from a derivative of coal tar, mixed with chemicals. Some of the chemicals used include benzidine (a carcinogen), lead, arsenic (also a carcinogen), and mercury.

Animal derivatives are not used in creating this artificial color, and hence, it is 100% plant-based.

Below are some everyday food products that contain Yellow 5:

One may think it is only used in junk or processed foods. Still, it is also used in pickles, soy sauce, other pantry staples, vitamin and medicine tablets, shampoo, toothpaste, hand wash, shaving cream, body wash, conditioner, mouthwash, salves, and moisturizers.

Is Yellow 5 Safe to Consume?

Yellow 5 is associated with studies that have linked this colorant to hyperactivity or ADHD in children. To add to its dangers, it is also linked to cancer, hives or rashes, depression, thyroid tumors, rhinitis, palpitations, blurred vision, mood swings, migraine attacks, and fatal asthma attacks.

Other than that, Yellow 5 makes one lose the mineral zinc through urine. Zinc is an essential mineral required by our body for metabolism, wound healing, immune system, thyroid function, sperm production, and blood clotting.

As stated above, Yellow 5 may also contain carcinogens benzidine and arsenic, lead, and mercury. Their side effects include:

Despite these findings, Yellow 5 is considered safe to use in Canada and the United States.

Similar to other artificial dyes, the Food and Drug Administration (“FDA”) in the United States approved the use of Yellow 5 in foods and beverages in 1969 and required manufacturers to list the artificial dyes used on the label of the product. The amount used is not regulated.

Between the years of 1969 to 1994, the FDA then approved the use of Yellow 5 in cosmetics, medicinal and vitamin pills/ tablets, topical medications, and eye treatment creams.

The daily intake for Yellow 5 is 5 mg/kg/day; however, it is tough to estimate the amount one takes, especially for children, as the amount used is not stated on food labels, and so many foods use these artificial colors.

Due to the increase in consumption of highly processed foods, people in the United States are unknowingly eating artificial colors four times the rate they did 50 years ago.

In the European Union, though, it is a different story. The use of Yellow 5 has been approved, but it is considered unsafe for children. Manufacturers are required to list the artificial dyes used on the product label, similar to the FDA. In addition to that, warning labels on foods containing the dye must be printed, informing consumers that they may cause hyperactivity issues. The warning is stated as: “May have an adverse effect on activity and attention in children.”

Due to the above, Austria and Norway have banned the use of Yellow 5. In the UK, due to high consumer criticism and the efforts by the British government, food manufacturers have opted for natural dyes instead. For example, Nutri-Grain bars and Skittles, both available in the American market, are dyed with natural colors, such as annatto, paprika, and beetroot powder in the United Kingdom, but not in the US.

The FDA didn’t adopt the use of warning labels in the US, citing a lack of evidence.

Regardless of what the FDA states, Yellow 5 is not naturally occurring on Earth. And it’s definitely not safe to consume.

Although yellow 5 is 100% plant-based, it is not only unsafe, it is also not vegan because:

When nature has all the solutions, why do we create synthetic ones?

Yes, there are alternatives to Yellow 5, which are safe, natural, and are healthy.

Alternatives for this bright yellow color are turmeric powder, yellow carrots, lemon zest, or saffron. The great news is these are all 100% plant-based and vegan.

One thing to keep in mind is that natural colorants are not as intense or bright as the synthetic ones, but they will still do the job!.

As the clean eating and organic trend are getting bigger and gaining popularity, big brands are adapting. Nestle USA is in the process of changing 75 recipes to get rid of artificial colorants. In some cases, these colorants were removed altogether. Some were replaced with natural dyes as these colors do not affect the products’ look and taste.

Nestle now uses the natural colorant annatto to color the crispy center part of Butterfingers (not vegan) instead of Yellow 5 and Red 40. Annatto is made from the fruit’s seeds from the tropical achiote tree, which is native to Mexico.

Kraft’s too removed Yellow 5 from its Macaroni & Cheese and replaced it with annatto, paprika, and turmeric. This significant change did not affect their sales at all, not even subtly.

More companies are jumping on board on the healthy bandwagon. This is all thanks to our tireless efforts and our conscious and active pursuit of purchasing ‘cleaner and healthier’ products. This is the power of consumer behavior.

We may feel our actions are sometimes small and unfruitful but don’t give up as we finally witness big companies changing their behavior. With us becoming pickier and choosier, we can affect more changes. Always remember, it only takes a small move to change the world.

Tartrazine is a yellow food dye that is often known as yellow 5. It’s plant-based but is sometimes tested on animals. Therefore, tartrazine is not vegan.