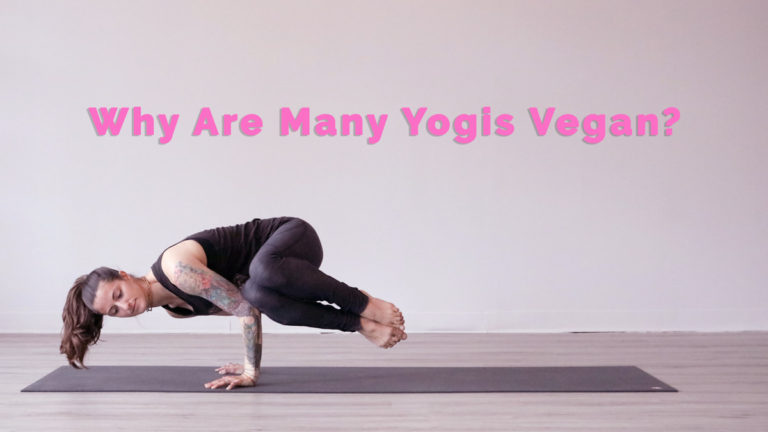 Keys to understanding the connection between yoga and veganism.

And who hears when animals cry?

Yoga is practiced by 300 million people globally. And many of them are vegans. The yoga discipline influences the diet of millions of people and is currently promoting the emergence of new conscious eaters around the world.

Millions of people who practice yoga also share a way of eating.

During practice and in the life out of the mat, a yogi’s body transforms. Breathing is different and, mental capabilities increase. It is not magic.

Science has recently discovered that the human body improves with the practice of this discipline from Ancient India. Expanded lung capacity, reduced cortisol (the stress hormone), increased brain function, and remarkable new muscle capabilities are some changes a yogi’s body undergoes.

Does this have anything to do with vegan eating?

In some cases, yes. Many yogis support their process with the consumption of fruits, green foods, and an almost infinite variety of non-animal foods. And the reason they do so is not only physical. It is also a philosophical and spiritual determination.

The number one principle of Yoga is non-violence. Ahimsa. It’s the universal principle of coexistence that seeks respect for human life and all creatures. A yogi incorporates this principle into their life, emptying their spirit of hostile intentions against any species.

It’s not an obligation or a mandate to be vegan to be a yogi. Yoga is a method of conscious self-regulation that leads people to relate more harmoniously with their environment. Those who adopt yoga as a philosophy of life progressively change many things in their daily lives. Food is one of them.

The practice naturally promotes healthier eating habits. For example, a yogi consumes on average more water daily than a non-practitioner. They also naturally begin to eat foods that do not produce heaviness that interfere with the practice. With the mental control developed over time, a yogi doesn’t eat food that makes them sick.

The consumption of animal-origin food has physical as well as spiritual consequences. On the one hand, meat is more complex to digest for the human body than plant-based foods. People who consume meat in excess have a greater cardiovascular risk and less immune response than those who diversify their diet. A meal from a diet based on animal consumption takes at least 7 hours to digest. For this reason, it produces permanent inflammation in the body. Chronic inflammation can contribute to the development of heart disease, diabetes, or cancer.

On the other hand, Indian tradition considers the torture, killing, and murder of animals as a source of Karma. Worldwide, 80 billion farm animals are killed for human consumption every year. These creatures were subjected to physical suffering during their lifetime. Their violent death consummates a cycle of suffering, which is also unsustainable for the planet.

Yoga as a discipline does not pretend to impose its principles. But making them known is part of the philosophy. With consciousness as a guide, a yogi’s body develops extraordinary capacities.

Hundreds of times people, who are not vegans yet, feel challenged for not eating this way. However, as for the rest of the discipline, yoga is non-pressuring and non-judgmental. Just as performing an asana requires patience and perseverance. The yogi will discover for themself when he is intellectually, emotionally, and spiritually ready to become a conscious eater.

If you are interested in adopting these principles in your life, be prepared to fail. You don’t have to blame yourself for it. More than 70% of vegans (who have not been vegan since their upbringing) admit to returning to animal-based foods several times. Start by creating a comprehensive meal plan that actually works for your life. Then some cruelty-free clothes and a vegan yoga mat. And enjoy the process.

No effort will be wasted if you find satisfaction in small daily actions. Plant-based nutrition has multiple benefits. Yoga and veganism are not dogma. It is a lifestyle that more people are assuming to improve themselves and their environment. Welcome.