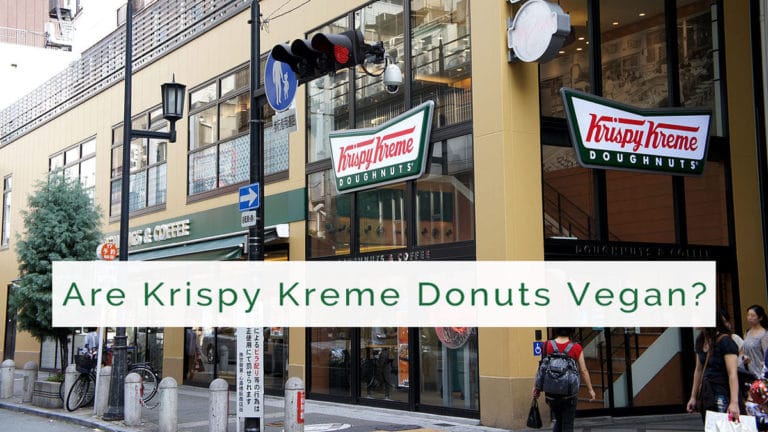 Unfortunately, Krispy Kreme Donuts are not vegan because they contain egg and milk ingredients. Luckily, there are alternative vegan versions of the famous glazed donuts at local vegan bakeries.

For many years, Krispy Kreme Doughnuts has provided the world with divine, light and airy donuts. The donuts are incredibly tasty, that they’ll leave you wanting more. It’s a show stopper and the most popular option of their donut range is the original glazed donut, which comes to no surprise because they spent years perfecting its recipe before making any other flavors.

With perfecting their original glazed donut, they made more delicious flavors such as their iced and filled range. But unfortunately for vegans, they do not provide any vegan-friendly options due to containing eggs and dairy products within their donut recipes.

You’ll find most donut stores will not provide any vegan options as eggs and dairy products are their main ingredients. But there are a fair few donut stores that provide vegan options such as Voodoo Donuts in various US locations, Karma Baker in California, Beet Box Bakery in Denver, and Bistro Morgan Bakehouse in Melbourne, Australia.

Krispy Kreme donuts, unlike many others, are light and airy. The donut batter sets them apart from their competitors and the original glaze is the cherry on top. The recipe itself contains yeast which not many donuts use, the airy texture is also due to the air-pressurized extruder that is used to form the donut shapes.

What Are the Flavors?

Krispy Kreme has many unique and flavorful donuts such as:

Though the donut range from Krispy Kreme isn’t vegan, there are other options such as:

But it’s not often a person visits a famous donut shop to buy drinks.

The first-ever built Krispy Kreme store opened in the 1930s in North Carolina, by a man named Vernon Rudolph. Many people at the time would follow the scent of the donuts from down the street and purchase a warm donut.

Krispy Kreme Donuts then started opening up a small number of stores and selling their original glazed donuts in the 1940s through to the 1950s, where they became quite popular and well known, that’s when they needed to innovate. Vernon and his team of engineers created a machine to make the donuts for each store, where they spent years improving and perfecting their machinery.

In 1976, Beatrice Foods company bought the Krispy Kreme franchisees when Vernon Rudolph passed away in  1973. Later in 1982, the small group of franchisees bought back Krispy Kreme donuts and began to expand to places all around America.

In 2003, Krispy Kreme made its debut in Sydney, Australia, and London, England. Since then Krispy Kreme has over 700 stores worldwide.

Where to buy Krispy Kreme Donuts?

You can find Krispy Kreme in prepacked boxes of 4, 6, and 12 at your local 7/11 store, Jesters, Zomato and even amazon.com sell Krispy Kreme donuts.

Is the Krispy Kreme Donut Range Healthier than Its Competitors?

But if you are trying to watch your weight or the calories you eat, even though Krispy Kreme is somewhat healthier than most donuts, you’ll want to make sure to eat it in moderation.

Some popular alternatives to the famous Krispy Kreme donuts are their top competitors such as Dunkin’, McDonald’s, Starbucks, Mad Over Donuts (MOD), and Sonic Drive-in.

Another perfect option you can try is making your fresh vegan donuts with the following recipe.

Even though there are many options for vegans to grab a donut from different donut stores, you may miss out on the crucial part of a good donut, freshness.

You can solve this problem by creating your fresh, warm donuts that are vegan-friendly.

Though Krispy Kreme donuts aren’t vegan, there are many other options out there and hopefully, in time, Krispy Kreme develops a vegan alternative that is just as delicious as their non-vegan products.