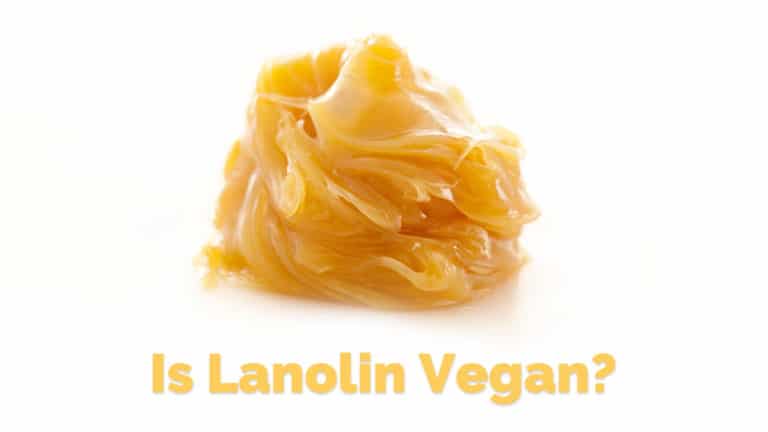 Lanolin is a waxy substance obtained from the secretion of wool-growing animals. Some of the methods of obtaining lanolin are cruel and therefore it’s not vegan.

Lanolin is considered non-vegan by most vegans. However, like many other controversial ingredients, you never miss a section of vegans comfortable with its use.

Understanding the reasons behind the stand of the two warring factions within the vegan world helps you fashion your own opinion. Better yet, if you accompany the information with facts is when you can make a fair judgment.

This post addresses the controversy surrounding the ingredient to help you determine if lanolin is vegan-friendly.

Lanolin is a yellow, waxy substance that comes from the secretions of the oil glands of wool-yielding animals.

In animals, lanolin helps in conditioning the wool and keeping the animal stay wet-free.

But humans are also interested in this gem, although they produce their version of lanolin called sebum.

And although lanolin can be derived from different candidates, the favorite source for humans is a gentle, quiet, meek animal: the domestic sheep. To be precise, the prized merino sheep.

Thanks to its softening and moisturizing abilities, various cultures have used lanolin for centuries as an emollient.

The cosmetic and skincare industry has heavily invested in lanolin, using it as an ingredient in lotions and creams, and many other products that help condition the skin. It is also used in hair oils, while some see it as a solution for cracked nipples.

Well, lanolin may pack several benefits to humans, but does it meet the standards of a vegan product?

On the surface, lanolin seems a vegan ingredient. Why? To extract it, the producers in the lanolin industry put wool in a centrifuge machine in a process that separates the oil from impurities. In this sense, it’s easy to say the ingredient is a byproduct of the wool industry. And since the lanolin industry deals with the wool itself after shearing rather than the sheep, some vegans argue the lanolin extraction process is cruel-free.

But you can only think in line with such arguments and view lanolin as a vegan ingredient until you pull back the curtain and see what goes on behind the scenes.

Suppose you’re on a transition to a plant-based lifestyle, which is never a one-night affair as it involves a lot of learning. In that case, you might use the argument as a decent excuse to use lanolin products.

However, if you are fully pledged vegan, there’s nowhere to hide as the ingredient is overtly non-vegan.

Why Lanolin is Non-Vegan

Although extracting lanolin is guiltless, you’ll find the horrors in the wool industry from farmed sheep where lanolin producers directly rely on it for their raw material.

And sorry to vegans. Thanks to the increasing demand for organic ingredients in cosmetic and skincare products where medical-grade lanolin is the most dominant, the lanolin market is growing globally.

And the only way to sustain the growing lanolin market? You guessed it: mass production of wool. That means flocks of sheep are needed, hence large-scale sheep farming.

And what’s wrong with large-scale sheep farming? Well, like its honey counterpart, the industry is profit-driven. If there’s any care for the animals, the primary producers, it comes a distant second in the priority list. There are rampant cruelties reported from the industrially farmed sheep, with their horrible life beginning as early as weeks-old lambs.

But remember, with no federal agency or state compiling violent cases against animals, it’s hard to know how frequent they occur.

That said, as explained below, there are several common, known types of abuses sheep suffer in the hands of ranchers and shearers before wool reaches the lanolin industry. It’s due to these reasons why vegans avoid products that contain lanolin.

The methods used to raise the sheep are suspicious. To leverage wool per animal, ranchers breed the sheep in a way that leaves the animals with wrinkly skin. While this is an advantage for the rancher, it doesn’t end well for the poor animals. Since it’s an unnatural procedure, the sheep often collapse, and in some cases, die, owing to heat exhaustion, especially during hot periods.

Also, the wrinkly skin houses moisture from the sheep’s urine and feces, creating an ideal home for flies that lay eggs in the skin folds. If not dealt with early, the eggs into hatch maggots, which start feeding on live sheep. You can guess the torture inflicted on the animal.

To discourage the invasion of flies, the ranchers resort to mulesing in the mistaken belief that it will create a fold-free smooth skin.

But it’s not the ideal method.

It’s a painful operation that involves carving huge slices of skin from both buttocks of a sheep. As if that’s not enough, the caretakers further strip off the skin from the sides and the tip of the sheep’s tail. And worse, the ranchers often carry out this cruel practice without anesthetics, yet it is a surgical procedure.

What’s more, mulesing leaves the sheep in pain for at least three whole days, while the scars take time to heal.

And does the terrible thing achieve results? Not effective as you would think. Many mutilated sheep are victims of slow, tormenting deaths caused by the same flies mulesing is meant to prevent.

As the industry is profit-oriented, those employed to shear the sheep do so fast to earn more as they’re paid per hour. That leads to fast shearing, prompting many workers to work carelessly, which injures many sheep.

Even worse, most of the shearing is done during the spring when sheep are just about to shed their winter coats.

The worst of all; directly killing the sheep

The sheep that are lucky to avoid death following various forms of mistreatment do not rejoice for long.

As sheep age, their wool production begins to go down, meaning a decline in sales. A fall in sales is the last thing the profit-driven industry wants. So to avoid it, many sheep are exported to the meat industry for slaughter before they reach six years of age. Sad terminating the life of a fellow animal for profit, given the fact sheep can otherwise live for at least ten years.

And before they reach the slaughterhouses, the sheep enjoy the last of pleasant experiences. The sheep can suffer a lot, including dehydration, heart attack, and heatstroke from the long, grueling journeys that can take weeks in often overcrowded cargo.

Thankfully, the market is flooding with vegan ingredients which can easily replace lanolin. And these alternatives are not only essential if you have the welfare of animals at heart but if you’re also allergic to lanolin. Better yet, the majority of plant-based lanolin alternatives come loaded with health benefits.

Derived from the nuts of the African shea tree, shea butter has been used as an ingredient in cosmetic and skincare products for centuries, thanks to its emollient properties. As it’s free of chemical irritants that would otherwise dry out your skin, shea butter keeps your body moisturized.

A great ally, your skin would cherish its high concentration of vitamins A and C and fatty acids, which protect against ultraviolet damage.

More good news is shea butter is safe for virtually all skin types as it rarely triggers allergies due to its low protein content.

Other than soothing dry skin, shea butter comes with boatloads of benefits, including:

A byproduct of the rice bran oil industry, rice bran wax is a 100% vegan-compliant ingredient.

While it can be used in many different fields, including in some foodstuffs and candle making, the vegetable wax is popular in the pharmaceutical and cosmetic industry.

It has a wide application, and you can find it as an ingredient in skincare products such as lip balms, lotion bars, mascaras, creams, salves, and ointments.

Moreover, rice bran wax is a healthful lanolin alternative due to its high antioxidant amounts, protecting skin cells from damage.

Cupuacu butter is made by cold pressing the seeds of the Cupuacu tree, found in the Amazon rainforest.

It’s mainly used in the cosmetic industry as a super ingredient to make effective skin moisturizers and conditioners.

Besides its skin conditioning properties, the ingredient is rich in antioxidants that may prevent potential oxidative stress caused by premature aging.

And like shea butter, Cupuacu butter has anti-inflammatory properties to cushion you from ultraviolet damage.

After looking at the horrors within industrial sheep farming, where the lanolin industry relies directly on raw material, vegans have every reason to avoid products containing the ingredient.

But it’s hard, if not impossible, to push the cosmetic and skincare industry into avoiding the use of lanolin in products many people need.

So the best response for vegans is to avoid products that use the ingredient. And, thankfully, there are many excellent, if not better, vegan alternatives to lanolin.

And while it’s good to know vegan-compliant brands, you’re better off going through the ingredient list of any product to determine if it’s cruelty-free.

Are sheep killed for lanolin?

No, sheep aren’t killed directly for lanolin. However, when age and production of wool or lanolin decreases, sheep are sometimes sent to slaughterhouses. Furthermore, the wool and lanolin industry may not always have the best interest of the sheep and cruel practices do occur.

No, lanolin is not dairy because it’s not produced from the milk of mammals. In contrast, lanolin is a yellow, waxy substance that is secreted from the oil glands of certain animals such as sheep. It’s used in several cosmetic products including lip balms and moisturizers.