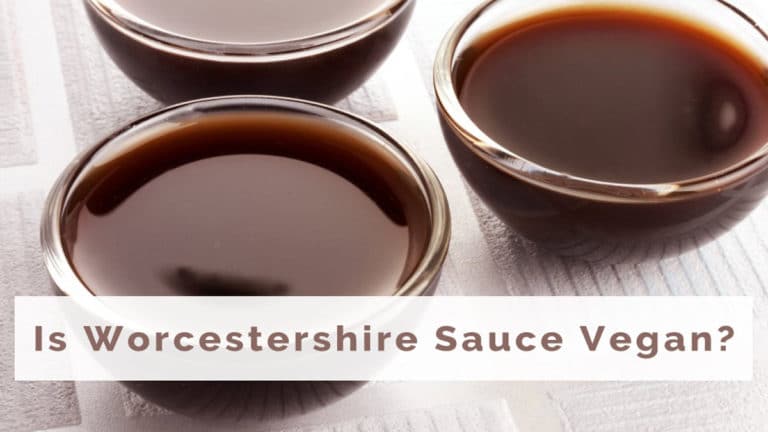 Following a plant-based diet can be a little challenging when it comes to sauces, and not because we crave that spoonful of mayo in our sandwiches. Sometimes disguised, the sauces can be present in places we wouldn’t expect, like cocktail drinks. Other times we’re not quite sure if they contain animal products or byproducts because it’s not immediately obvious. Worcestershire sauce is one of the tricky ones, it doesn’t taste anything like fish, but has anchovies in the ingredient list.

What is Worcestershire Sauce?

Worcestershire sauce was first manufactured by chemists Lea and Perrins from Worcester, England, way back in the early 19th century. The sauce’s recipe is as complex as its name is hard to pronounce. Basically, everything is fermented, blended, then fermented again. The intensity of flavors comes from this long maturing and fermenting process.

The main ingredients in Worcestershire sauce are vinegar, red onions, garlic, molasses, tamarind paste, salt, sugar, and the dreaded anchovies that make it unfit for vegan consumption. There’s also a variety of other spices included to season the sauce, like mustard seeds, pepper, cloves, or coriander.

Worcestershire sauce is praised for its complexity of flavor, as well as the tangy balance between sweet, savory, and salty. It also has this thing called umami, the fifth of the basic tastes, that amateur cooks and chefs alike look to create in their dishes.

Where Is Worcestershire Sauce Used in Food?

Worcestershire sauce is a versatile ingredient that can be used in pretty much anything. Including stocks, broths, marinades, salads, soups, you name it. A couple of spoons of Worcestershire sauce will make it flavorful. It’s acid and sweet flavor also makes it an ideal condiment for vinaigrettes or salad sauces.

Surprisingly, there are a number of cocktails that include Worcestershire sauce. One of my favorite cocktails, Bloody Mary, is famously made using Worcestershire sauce to give it a more intense, tangy flavor. Let me just say I was not happy to find that there was fish in my delicious drink.

If it sounds like I’m trying to sell you on Worcestershire sauce by telling you how great it is, it’s because I am. Yes, traditional sauces that follow the 180-year-old recipe are not vegan, but this is the new millennium, we’ve learned to make delicious, versatile sauces that pack as much flavor as the original, but without using animal products or derivatives.

Here are a few vegan Worcestershire sauces that we love.

Annie’s Naturals makes an organic and vegan Worcestershire that has great reviews across the board. It’s anchovies free, of course. The ingredients are a little bit different than the original recipe, with apple cider vinegar replacing malt vinegar and soy sauce as an addition. This vegan alternative is rich in flavor, making it a vegan favorite.

Another popular vegan option is The Wizard’s Organic Vegan Worcestershire Sauce. It packs the same punch of flavor as the original recipe, without using animal products. Now I can have my cocktails without worrying about drinking fish.

Wan Ja Shan also makes an organic, vegan, and gluten-free Worcestershire sauce. A great tasting sauce with a robust flavor, and no fish in my Bloody Mary.

Now if you’re in a bind and your recipe calls for Worcestershire sauce but you don’t have a vegan alternative, soy sauce is a great replacement. It gives your food that same tang, complex flavor.

Or you could make your own Worcestershire sauce at home.

Here is a recipe for home-made, vegan Worcestershire sauce.

Gather all ingredients in a medium-size saucepan and bring to a boil in medium-high heat. Reduce heat and let simmer until the mixture is reduced by half. This should take around 20 minutes. Then, strain the sauce through a fine-mesh sieve, wait until it’s cold before using.

Now, this is Martha Steward’s recipe, but you can tweak and change your sauce to meet your needs and tastes. You can make a version that is low-sodium by using low-sodium soy spice, or you can make a gluten-free version too. It’s up to you!

Although the original, 180-year-old recipe of Worcestershire sauce contains anchovies and isn’t vegan, there’s no reason for people today to consume products that are not cruelty-free. The vegan market has expanded considerably in the last decade, making animal cruelty-free alternatives available for most products out there.

Times have changed since Worcestershire sauce was first developed, and companies need to keep up with this shift towards a future where our food is completely cruelty-free.

Being vegan can at times be challenging, not because we crave animal products, but because animal products are secretly in everything. Like my Bloody Mary. It’s hard sometimes if you don’t know what ingredients go in your drinks or if the ingredients are not properly listed. Maybe in the future, we can campaign for an extensive list of ingredients for all our cocktails, just so I can make sure I’m not accidentally drinking fish.

Lea & Perrins Worcestershire Sauce is the original sauce and for that reason, they follow the original 200-year-old recipe. That means that this sauce is not vegan, a quick glance at the ingredients list confirms it has anchovies. Maybe it’s time they update their traditional recipe to reflect the development that’s been made, and still ongoing, in animal welfare.

I was browsing around Kroger and saw that they had their own Worcestershire sauce. Out of curiosity, I picked it up and lo-and-behold, it’s vegan. There’s no anchovies or any other animal byproducts in the ingredient list. I used it to make Bloody Marys and the flavor of this sauce is amazing.

Heinz Worcestershire sauce is not vegan. You can see anchovies listed towards the bottom of the ingredient list. Maybe the giant sauce brand could come up with a vegan version? I’m sure my fellow vegans would be pleased.

French’s Worcestershire sauce is mainly recommended for meat marinades, so it’s no surprise to learn that this sauce is not vegan. As with the other non-vegan sauces, it contains anchovies, making it unsuitable for vegans.

As stated above in our recommended vegan alternatives, Annie’s Worcestershire sauce is vegan. It is entirely delicious and completely cruelty-free, definitely a favorite of my own and in the vegan community.

Chippa’s Worcestershire Sauce is not only gluten-free, but it’s also vegan. Anchovies are nowhere to be found in its ingredients list, proving that you don’t have to use animal products to make delicious, flavorful food. Chippa’s sauce is another vegan favorite that pairs really well with veggies, especially in a stir-fry.

Coles advertises their Worcestershire sauce as gluten-free and prides itself on being made in Australia with locally sourced products from Australia as well. Coles doesn’t advertise their sauce as vegan, nor it is mentioned in the packaging, but the ingredients list doesn’t contain anchovies or any other animal byproducts. So, Coles is another tasty, vegan, cruelty-free Worcestershire sauce.

Although Maggi’s Worcestershire Sauce appears to be vegan, as there is no anchovy listed in the ingredients, they state in their FAQs that it is not suitable for vegans. They do state that the sauce is vegetarian, meaning that it probably contains other animal byproducts such as eggs, or milk.