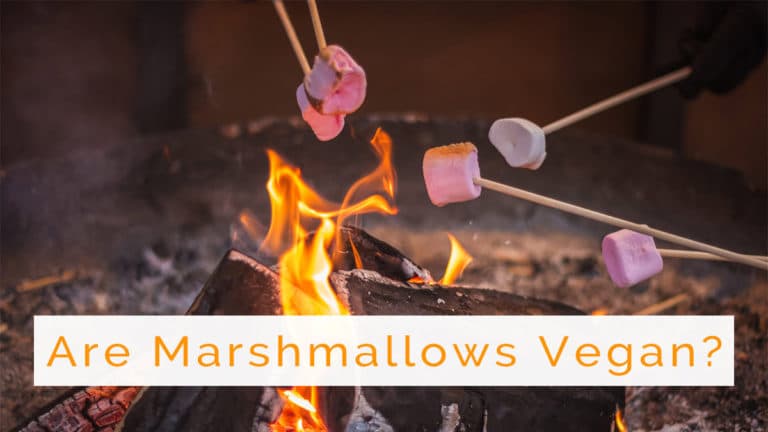 Traditional marshmallows are not vegan because they are made using gelatin, an ingredient derived from animal byproducts. However, there vegan options available for marshmallow lovers.

When you initially go vegan, it can be confusing to figure out which food items fall into that category and which ones are excluded. Luckily for you though, all packaged foods come with an ingredients label making it easy to avoid products with eggs, dairy, or meat contained in them.

But obvious animal ingredients like dairy and eggs aren’t the only non-vegan products used in packaged foods. In fact, some ingredients used in certain food products are derived from animals, and without knowing the name of these ingredients it’s difficult to figure out whether something is vegan or not.

Take marshmallows for example. Marshmallows don’t contain meat, dairy, eggs, or any regular non-vegan ingredient that you’re used to. And yet, most conventional marshmallows today are non-vegan. Let’s find out why.

Why Marshmallows Are Not Vegan

Marshmallows are a type of confectionery with a soft, gooey consistency, made using sugar and water. In some cases, corn syrup is added during the manufacturing process to give marshmallows a certain thickness. This thickness is found in the type of marshmallows used to make smores.

Gelatin is a colorless, tasteless, and translucent water-soluble protein made using collagen. This collagen is extracted by boiling the skin, bones, ligaments, and tendons of animals like cows, pigs, and sheep.

Gelatin is what gives marshmallows their distinctive texture and feel. It’s used in a host of food products, like yogurt, jelly, and gummy bears, and also in cosmetic products and supplements.

The Effects of Gelatin

As a supplement recommended by doctors, gelatin has been shown to help treat osteoarthritis, reduce joint pain, prevent wrinkled skin, and slow down signs of aging.

Collagen is required by our cells to repair damaged tissue and to undo the ill effects of too much wear and tear on the body. It is believed that since gelatin is made from collagen, it naturally contains the ingredients necessary to help restore our bodies.

However, knowing that gelatin is made from deceased animals, we must stop to consider whether this substance might actually be harmful to us in some way.

Bacteria and pathogens are abundant in the animal agricultural industry, and it’s possible that unsafe manufacturing processes, coupled with diseased animal tissue, can lead to the contamination of gelatin.

In some cases, this can even lead to the transmission of animal-borne viruses, such as mad cow disease. The risks of using animal-derived supplements may very well outweigh the benefits and it’s best to stay away from them when you can.

It’s a small wonder that gelatin production is environmentally unsustainable, like every other product of the animal agricultural industry. The ingredient is obtained from a variety of animals, including pigs, cows, sheep, chickens, and fish. Simply allocating space for these animals and keeping them alive and well-fed can cause unimaginable destruction to the environment.

Entire forests are sometimes cleared to set up pastures and farmlands to house these animals. Additional land is cleared to grow crops used as feed. And finally, enormous quantities of water get wasted cleaning pens and sheds, with even more getting used to keeping these animals hydrated. In fact, a single cow can drink up to 180 liters (50 gallons) of water in a single day. Imagine a whole farm of cows drinking that much water every day—for years.

The excrement or manure from these farms gets washed away into the soil or freshwater sources like rivers and streams. On a global scale, clearing of forests and agricultural runoff can cause water pollution, habitat loss, and even species extinction in the long run.

Aside from being environmentally unsustainable, gelatin production is also an unethical, cruel practice. It requires that animals be treated like commodities, exploited and killed for the production of gelatin. And while the ingredient is used to create a host of products, we must question whether obtaining gelatin is worth harming another sentient being. Especially when we’ve got vegan alternatives that are slowly replacing gelatin in many common foods.

Luckily, companies dedicated to making vegan marshmallows are slowly on the rise. Thanks to their ingenuity, we can easily drop gelatin from our diets while continuing to enjoy the gummy goodness of marshmallows.

Thanks to the spike in demand for vegan marshmallows and other products that use gelatin, like yogurt, jelly, and candles, alternatives to gelatin are slowly proliferating into mainstream manufacturing processes. Hopefully, the increased demand for these alternatives will start to slowly phase out the use of gelatin. Here are a few alternatives.

Perhaps the most common alternative to gelatin today, agar-agar is a thickening agent produced by cooking and pressing seaweed. The final product is a powdery or flaky substance that can be added to food preparations, just like gelatin.

You can use either form of agar-agar as a gelatin substitute, but if you can get your hands on powdered agar-agar that would be best. The powdered form replaces gelatin adequately and can be used in the exact proportions as you would use gelatin.

The flaked version of agar-agar is a little trickier to use and may require up to three portions for every one portion of regular gelatin.

However, unlike gelatin, agar-agar is free from fat and contains zero calories. It is also rich in dietary fiber, which aids in both digestive processes and weight loss. The extra fiber reduces your overall appetite and inhibits the body’s tendency to store excess fat. Agar-agar also helps to keep your system clean by acting as a natural laxative that helps relieve constipation.

Another common vegan alternative to gelatin is carrageenan; a gelling agent made by boiling Irish moss seaweed and filtering out the solid components. The liquid that’s left behind is then dehydrated using alcohol, or boiled until a gel is obtained. This gel is then pressed or dried until you’re left with carrageenan powder.

You can find a variety of different carrageenan powders, each with their own proclivity towards certain products. Iota carrageenan, for example, is used to make softer foods, like cakes and soft puddings. Another type, kappa carrageenan, is used as a substitute for gelatin in harder products, like jelly and marshmallows.

Vegetable gums are used extensively in the making of ice cream, chewing gum, and certain baked goods. The most common types of vegetable gums include Guar gum and Xanthan gum.

Guar gum can be easily dissolved in liquid during the preparation of jelly or other confectionaries. It’s a highly effective thickening agent, however, its quality varies based on the pH level and temperature.

Xanthan gum is actually much more effective at increasing the viscosity or thickness of a liquid and retains this property at higher temperatures. But even with its higher stability, Xanthan is best used in making jelly candies, ice cream, and chewing gum and isn’t used to make marshmallows. While it does retain its properties at higher temperatures, Xanthan cannot replicate the gelling properties offered by other seaweed-derived gelatin alternatives.

While pectin is far from the perfect substitute for gelatin, it’s still used in making jellies, jams, and marmalades. Pectin is obtained by boiling, filtering, and dehydrating citrus fruit peels, which leaves a powder that can be added to food preparations.

Konjac powder is best for making jelly candies and isn’t really used in other gelatin-related preparations. Konjac is a yam-like plant that is dried and pressed to produce a powder popularly called konjac flour.

Of all these vegan gelatin alternatives, agar-agar is best suited for making vegan marshmallows thanks to its superior gelling properties. In fact, most vegan marshmallows are made with the help of agar-agar, which also happens to be better for your health, the environment, and for the animals.

Marshmallows can be vegan.

If you’re considering a vegan or plant-based diet, but giving up marshmallows seems difficult, now you know you won’t have to. With the host of gelatin alternatives available today, vegan marshmallows, gummy bears, and flavored yogurt can be found in cities across the world, so you don’t have to feel like you’re giving up anything.

In fact, by choosing to give up gelatin, and switching to vegan marshmallows, you get to keep your favorite snacks while maintaining a clear conscience about the impact you’re having on the animals, your health, and the planet as a whole. And this is one of the greatest benefits of choosing a cruelty-free lifestyle.