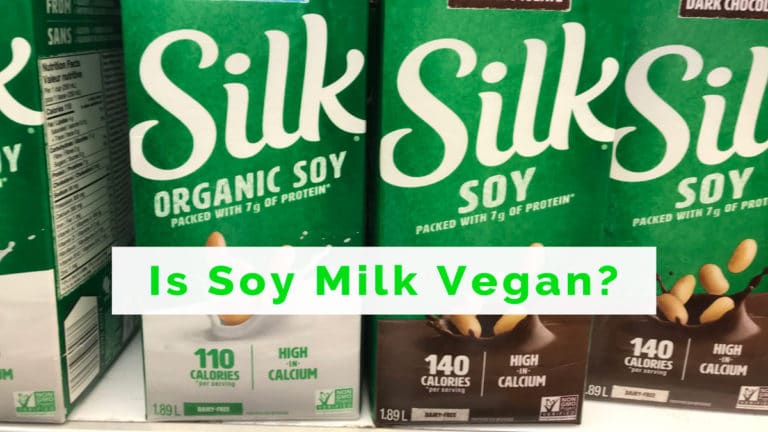 Soy milk is vegan. It’s 100% plant-based, non-dairy, and made from soybeans. It’s a great and healthier alternative to dairy milk.

In recent years, soy milk has gained immense popularity as an alternative to dairy milk. And with the plant-based industry growing at such a rapid pace, more and more people are consuming soy milk regularly.

But where does soy milk come from? And is it actually vegan and healthy?

Where Soy Milk Comes From

Soy milk is produced by soaking soybeans overnight and then grinding the beans while consistently adding water to the blend. This mix is then boiled and the remaining solid particles are filtered out.

And just like other plant-based milks, such as almond milk or rice milk, soy milk is entirely vegan and makes for the perfect alternative to dairy.

Ever since soy began to be distributed in supermarkets, myths surrounding this product have been perpetuated throughout the food industry.

And while excess consumption can adversely affect your health, moderate soy milk intake can provide numerous health benefits. Let’s take a look at some of these health benefits.

The myth that protein only comes from animal sources has been long since debunked, and today plant-based athletes are making their mark across the world.

One cup (roughly 8 oz) of soy milk packs 7 grams of protein, making soy milk an excellent supplement for those looking to build lean muscle and burn excess fat. After a workout, a glass of soy milk can give your body the necessary nutrients to start recovering and build strength.

Protein is also an essential nutrient in maintaining the body and acts as the cells’ building blocks. It allows your body to repair cell damage and build and nurture new cells, aiding in renewal.

Thanks to this nutrient, moderate consumption of soy milk every week can give your system the necessary raw materials to revitalize your body.

Getting enough protein into your body can be a challenge in itself, but to ensure that the protein is absorbed effectively requires the presence of fiber. And soy milk has an abundance of fiber that can be efficiently utilized by the body.

Being rich in fiber, soy milk can improve gastrointestinal health by digesting food and absorbing the nutrients it has to offer more effectively. The increased fiber helps your body make optimum use of the food you consume and allows the system to expel toxins more effectively.

Unlike dairy milk obtained from cows, soy milk is made entirely from plants and is free from cholesterol. Additionally, soy milk offers all the nutritional benefits found in cow’s milk, but without the cholesterol and saturated fats present in dairy.

Our bodies produce a sufficient quantity of cholesterol for our day-to-day workings. But excess cholesterol cannot be easily utilized by the body and is usually deposited on the arterial walls’ inner lining. Over time, these deposits build up and restrict blood flow, causing a range of problems, from joint pain to heart disease.

By consuming soy milk instead of dairy, you can altogether avoid the adverse effects of cholesterol and keep your heart healthy.

While it can be challenging to obtain protein from most food sources, soy milk seems to have an abundance of it. And potassium is a mineral that plays a vital role in many of our physiological processes.

b) Potassium is required by the nervous system to generate nerve impulses and send signals to different areas of the body.

c) The movement of potassium ions in and out of different cells in the body aids in higher physiological processes, like muscular contractions and heartbeats. As you can see, potassium is a vital nutrient to ensure the normal functioning of the body. In addition to these, potassium also boosts the gastrointestinal system’s ability to eliminate toxins from the body. This way, it helps to keep the body in shape and minimizes fluctuations in our physiological system. And all the potassium you need can be found in a glass of soy milk.

Being rich in protein and fiber, soy milk boosts the body’s basal metabolic rate, helping you burn fat while retaining muscle mass. A low-fat diet consumed with soy milk, along with a lifestyle of regular exercise, can work wonders on your physique.

The health benefits of soy milk cannot be overstated, and the list goes on. But thanks to widespread misinformation, soy milk has earned a bad reputation among vegans and non-vegans alike. A few of the myths surrounding these products have made the public skeptical about consuming soy milk and whether it’s healthy or harmful.

Let’s look at the two most common soy milk myths and how they have been misinterpreted.

One of the most perpetuated myths about soy milk and soy products, in general, is that consumption of soy leads to breast cancer. This idea first came about when scientists found that soy is rich in a compound called isoflavones.

Also known as phytoestrogens, isoflavones mimic natural estrogen and bind to estrogen receptors in the body. The presence of this compound has left the medical industry concerned as increased estrogen levels in the body have been directly linked to the development of breast cancer. Hence the premise that consumption of soy milk can lead to this disease.

Recent studies have shown that there appears to be no connection between soy consumption and breast cancer development.

Initially, when the public at large was consuming soy milk, there was mass hysteria about how soy milk can lead to the formation of breasts in men. But just as before, the presence of isoflavones was the reason for all the panic. And as mentioned earlier, isoflavones bind more weakly to receptors in the body and have a diminutive effect on men’s hormonal changes.

Of course, in excess, soy milk has been found to have strange effects on men’s hormonal cycle. However, a review found that moderate consumption of soy milk did not affect testosterone levels in healthy men.

There is also the assumption that soy milk causes thyroid dysfunction and a host of other health issues. However, most of these hypotheses have been made due to the presence of isoflavones in soy milk. And some of these health issues arise due to the consumption of excess processed soy milk. Even with a healthy product like soy milk, it’s vital that we can source it from a more natural source as processing adds components that are unhealthy.

If you haven’t already, consider shifting from cow’s milk to soy milk, and you’ll be on the road to a healthier, more wholesome lifestyle. Aside from the fact that it comes without cholesterol or saturated fat, soy milk is also produced in a cleaner, ethical way.

The dairy industry is known for its cruel practices that have become an essential element in cow’s milk production. All of the stress, fear, and pain that these innocent animals have to go through can be easily negated if we slowly shift towards soy milk.

Additionally, the dairy industry practices cause unimaginable harm to the environment and the resources that the Earth has to offer. Thousands of liters of water are wasted every day to wash cow pens and water the cows. Large swathes of forest land are decimated to make room for land to house the cows and grow cattle feed.

All of this, along with the methane produced by dairy farms, has led to an increase in forest fires, climate change, and other natural disasters.

So switch over to soy milk, and you can avoid causing harm to animals and the planet while keeping yourself strong, healthy, and cholesterol-free.

Yes, oat milk is completely vegan and is made from oats. It’s a great plant-based alternative to dairy milk and is usually fortified with minerals and nutrients.

Yes, soy milk is dairy-free and vegan-friendly. It’s made from soybeans and is a healthier and ethical alternative to cow’s milk.