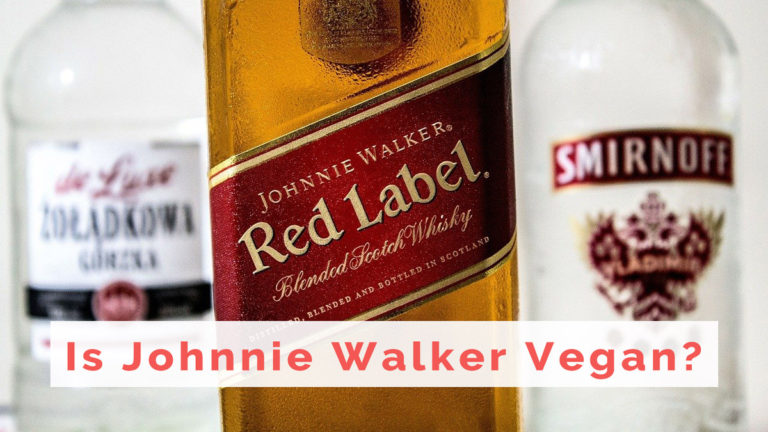 Johnnie Walker is completely vegan. The blended Scotch whiskey company does not use any animal-derived fining agents.

Johnnie Walker happens to be one of the world’s most famous whiskies, as well as one that whisky aficionados are most skeptical of. It’s despised by a select few who believe that no one should be paying top dollar for a whisky that tastes like any other premium whisky.

A lot of naysayers believe that people buying Johnnie Walker are paying solely for the brand name.

But it’s important to remember that the taste of the whisky and the value we ascribe to it is subjective.

And Johnnie Walker is priced as a premium brand for good reason — it happens to be one of the finest whiskies on the market, with the company claiming that they sell almost six bottles every second!

First off, not all alcohol is vegan. Most drinkers firmly believe that drinks like wine and beer are made entirely from plants — wine from grapes and beer from barley.

However, during the manufacturing phase, these drinks are clarified (or processed) for a distinct taste and look. This clarification is done using ingredients called finings, which are mixed with the wine or beer to extract impurities.

Traditionally, the finings used to clarify alcoholic drinks are usually albumin (egg whites), gelatin (animal protein), and isinglass (fish bladder). This is why the wine and beer produced by certain manufacturers may not be vegan.

Whisky, however, does not use these finings, and hence is entirely vegan by default.

Certain whisky manufacturers, however, add honey to the processed whisky to enhance the sweetness. And in the case of cream liqueurs, milk is used for a creamy, sweet flavor. In both these cases, of course, the whisky obtained as the end product isn’t vegan.

Johnnie Walker doesn’t use non-vegan ingredients in any of their products. Hence, all versions of Johnnie Walker whisky are entirely vegan.

What Type of Whisky is Johnnie Walker?

Johnnie Walker falls under the category of blended Scotch whisky, which happens to be one of the five categories of Scotch, the others being:

This is the least expensive of the Johnnie Walker whiskies, with a rougher taste than the others. It happens to be perfect for those starting to try out Scotch whisky.

Perhaps the most popular whisky of the Johnnie Walker brand, Black Label contains almost 30 to 40 different malts. It’s headier than the Red and less refined than the higher-ups, but it’s still hard to beat in terms of taste.

The term double black is used to indicate the extra peat and smoke malts used in this blend. This is a term unique to Johnnie Walker and not used as the norm in the whisky industry.

Unlike the others on this list, Johnnie Walker Green is a blended malt Scotch whisky, which means no grain was used in its making. Instead, this is a blend made from different distilleries with single malts.

If you’re into single malts, you’ll love this one for its heavier taste.

Gold happens to be a more well-known whisky by Johnnie Walker, which was relaunched in 2012. Gold is best sipped chilled when the aromas are more dormant due to the cold. Few whiskies can compete with a cool bottle of Gold when it comes to the soft and smooth taste.

For those who want a really aged bottle of whisky, the Johnnie Walker Platinum takes the cake. Aged for at least 18 years (or more) in Scotland, the Platinum from Johnnie Walker is headier and yet less robust than the Black.

The Blue is perhaps one of the easiest whiskies to sip on and comes from a distillery called Royal Lochnagar. It’s difficult to tell the kind of blends that have gone into it, but it’s sure to always taste just right.

The best part is that every one of these Johnnie Walker fine whiskies is entirely vegan, and made from a mix of malt and grain in varying quantities, depending on the color.

So if you’re worried you’ll have to give up the occasional glass of Scotch after going vegan, you can rest assured that a glass of Johnnie Walker can help satisfy that craving.