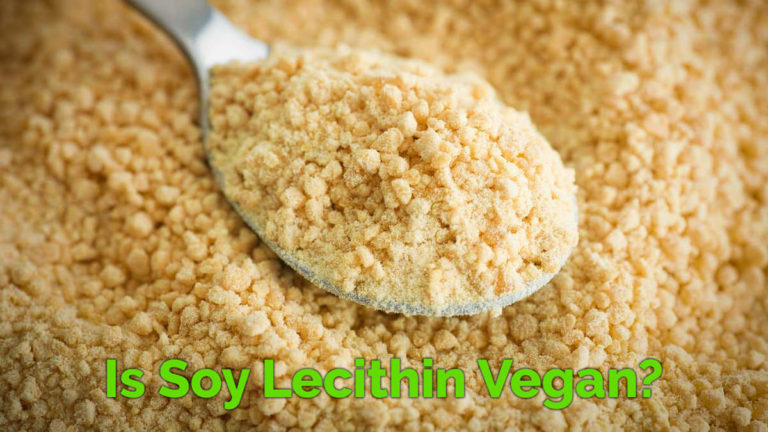 When you’re devoted to the vegan lifestyle, you tend to be a lot more conscious of what you’re putting into your body. As such, every item in your shopping cart is usually double-checked to ensure that the products are free from animal additives.

But sometimes, it’s unclear which source an ingredient is derived from. For example, words like ‘lanolin’ and ‘gelatin’ seem harmless and give no clear indicator of whether they are obtained from animals or plants. But lanolin is a byproduct of the wool industry, and gelatin is made from the scraps collected from the meat and leather industry. So while these may not sound like common non-vegan ingredients, they actually come from the animal industry.

One such ingredient that vegans today seem to be confused about is ‘soy lecithin.’ We’re all aware that soy itself is vegan, but the word ‘lecithin’ creates some ambiguity; let’s take a look at what it is.

Lecithin is a popular additive used in various foods, including chocolates, chips, cakes, and breads. It is used as an emulsifier in foods, keeping the food lubricated and non-sticky while protecting the flavor.

Lecithin is a general word used to classify certain fatty compounds, like glycerol and phospholipids. These phospholipids are a part of the cell membrane in all plants and animals, and while it can be derived from multiple sources, it is usually obtained from sunflower seeds, egg yolk, milk, and soy.

Most people aren’t aware of this, but soy lecithin is prevalent in nearly every food product we purchase today and is quite the popular preservative.

Is Soy Lecithin Vegan and How is it Made?

The most popular lecithin source happens to be soybeans, as they are readily available, inexpensive, and can be easily handled during the manufacturing process. Therefore, soy lecithin is vegan.

First, raw soybeans are soaked in a chemical solvent, usually hexane, and the oil is separated and extracted from the beans. After extraction, this crude soybean oil goes through a ‘degumming’ process, during which the lecithin is removed and separated from the oil.

In order to do this, the oil is hydrated by being continuously mixed with water, during which process the lecithin separates from the oil.

This lecithin is then dried, so it can solidify and occasionally bleached with hydrogen peroxide. Once this additive is ready, it is sold to manufacturing plants or used to create certain food products, most of which we consume regularly.

The primary role of soy lecithin in most food products is to act as an emulsifier, allowing water and oil to blend together and stay in that state in certain foods.

Ordinarily, this would be impractical as water tends to separate from oil very easily, and without this sort of binding, it would be impossible to make creamy foods, like mayonnaise, peanut butter, and creamy salad dressings.

That velvety, smooth texture of chocolate that we all enjoy so much; it’s all thanks to soy lecithin, without which chocolate would not have the same appeal that it does today.

Soy lecithin is also used as a preservative as it helps stabilize oils in food, significantly increasing their shelf life. This is the reason why nearly every processed food product contains soy lecithin. Without it would be impossible to keep them on the supermarket shelf for more than a few days.

Soy lecithin also prevents stickiness, preventing food from getting stuck to pots and pans while cooking. This anti-stick quality is why this compound is added to bread dough as well; thanks to the lecithin, the gas bubbles in the dough find less resistance as they puff up, allowing the dough to rise better while being baked.

Finally, soy lecithin is also used as a surfactant, which reduces the surface tension of other liquids. This reduction in surface tension allows liquids to spread faster and mix well with other ingredients.

Thanks to this trait, soy lecithin is a popular additive in cakes and other baking mixes. It allows the water to spread evenly and quickly throughout the batter preventing unwanted clumps and blobs, and making the cake a lot less lumpy.

Besides cakes, breads, processed foods, and chocolate, soy lecithin can be found in many everyday food products, including ice cream and peanut butter.

Soy lecithin is popularly sold as a dietary supplement due to its high content of choline. This compound, choline, has been shown to reduce bad cholesterol in the body, effectively reducing heart disease risk.

There are claims that the process of obtaining soy lecithin leaves residual chemicals in the ingredient. In fact, the extraction process involves the use of hexane, minute quantities of which may be retained even after the lecithin has been separated from the oil.

So as such, while soy lecithin in itself isn’t wholesome or particularly healthy (except for the choline that it offers the body), it has minimal effect, almost negligible, to the toxic load on our bodies and can be safely consumed.

Though soy lecithin is vegan and obtained far more ethically and sustainably than non-vegan ingredients, the real problem is that it’s used primarily in processed foods. And while lecithin itself isn’t exactly harmful, the other ingredients in processed foods can have a serious negative impact on your health.

So while it may be safe to consume soy lecithin in regular products, like bread and cakes, you may want to avoid processed foods altogether due to the other toxins they pump into the body.

Stay healthy and wholesome, and your life will transform for the better.