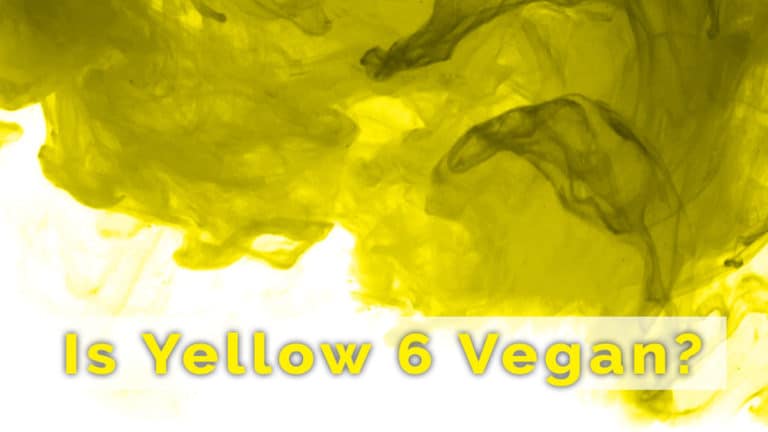 [su_note note_color=”#f7f4aa” radius=”2″]Though it does not contain animal ingredients, Yellow 6 is not vegan because it is sometimes tested on animals.[/su_note]

Based on our previous articles on Red 40 and Yellow 5, we know the dangers of artificial dyes.

Then why are they still being used in our food, medicinal, cosmetic, and fashion products?

Artificial dyes are dispensable add-ons used in our foods. They’re not added for taste, nor for nutritional value, but for the only purpose to make our foods look attractive, appealing, and appetizing to consumers by enhancing its colors.

Companies and manufacturers have been using this strategy for a long time to make money.

Previously, natural dyes were used, but until after the industrial revolution and the introduction of coal, then the black gold (aka petroleum).

Laboratory studies have shown that these artificial colors are dangerous to our health, especially if taken over a long time, which is happening today.

Artificial colors are prevalent in most consumer products, from foods, cosmetics, and personal hygiene products. Mind you, it’s not just found in junk foods, but also in our everyday pantry staples.

Yellow 6, otherwise known as Yellow #6, FD&C Yellow 6, Sunset Yellow FCF, E110, Orange Yellow S, or CI 15985, is considered one of the most harmful when compared to other artificial dyes. Yellow 6 is used in many food products such as candy, ice cream, cakes, pet foods, medicines, and fashion.

Similar to Red 40 and Yellow 5, Yellow 6 is an azo dye, meaning it is made from the by-product of petroleum or coal tar mixed with toxic chemicals, commonly benzidine. Yellow 6 is essentially a sulfonated form of Sudan 1 (an azo dye). Sudan 1 was developed during the high time of the textile industry in Europe towards the end of the 19th century. It was first synthesized in the 1890s in Germany.

Sudan 1 is classified as a category three carcinogen by the International Agency for Research on Cancer. This means that it has proven to cause cancers in lab animals but no link to humans.

You would be interested to know that although the use of Sudan 1 has been banned, the sulfonated form of it, which is Yellow 6, is still in use.

Yellow 6 does not contain any animal ingredients.

Yellow 6 are commonly found in:

The Yellow 6 dye is used in other products, too, such as our toothpaste or lipstick. As always, be an informed consumer and thoroughly check the labels of items before you decide to purchase anything.

Is Yellow 6 Safe to Consume?

Like the other dyes mentioned, Yellow 6 is heavily linked with hyperactivity or ADHD in children. It has also been linked with hives and rashes, asthma, birth defects, tumors, and possible organ damage.

It is important to note that laboratory tests and medical studies have revealed that Yellow 6 is a carcinogen when tested on rats, mice, and rabbits.

Despite these studies, the Food and Drug Administration (FDA) in the United States (US) found them insignificant as they were not proven to be carcinogenic to humans. Yellow 6 is on the approval list of the FDA, along with Red 40 and Yellow 5. However, manufacturers must list them on the label if these colors are present. The amount used, though, is not regulated.

In Europe, the use of Yellow 6 has been approved, but it is considered unsafe for children. Similar to Red 40 and Yellow 5, manufacturers are required to list the artificial dyes used on the product label and add a warning on foods that contain the dyes. The warning is stated as: “May have an adverse effect on activity and attention in children.”

In the United Kingdom (UK), the British Food Standards Agency has banned the use of Yellow 6 in foods and cosmetics. Manufacturers and companies in the UK turn to natural solutions such as turmeric, annatto, and paprika.

Norway, Finland, and Sweden have also banned the use of Yellow 6.

In the United States, the Center of Science in the Public Interest is appealing to ban the use of all artificial colorants in foods and cosmetics to the FDA.

Yellow 6, although 100% plant-based, would not be considered vegan. It is also not safe to be consumed or even in contact with our skin.

The dye is tested on rats, mice, and rabbits. It has resulted in adrenal and testicular tumors in these little innocent beings. The reason why Yellow 6 is not considered vegan — it doesn’t come cruelty-free.

Are There Natural Alternatives?

Yes, there are natural alternatives. Yellow plants get their colors from natural pigments such as carotenoids, anthocyanin, and betalains. We can use these natural and healthy alternatives to give a dash of color to our foods. However, the colors may not be as intense as the synthetic colorants.

The potent and common natural dye for yellow is turmeric. Some manufacturers and companies are now using turmeric or the compound that gives it the color, curcumin, in mustard blends.

Below are other natural coloring solutions, which have either carotenoids, anthocyanin, or betalains:

These can be used when you want to add color to your cakes, sauces, and many other things.

What Can We Do?

It is exhausting and time-consuming to read the labels of every food product we buy when we walk down the supermarkets’ long aisles. We would then need to Google the items listed on the labels — some of these ingredients can’t be pronounced and are made of stuff that we have never heard.

Regardless of how much fatigue it brings us, the onus is on us to check and verify, and then check again. With each new knowledge and wisdom we acquire, we can then start holding companies and manufacturers accountable.

As mentioned in the previous article on Yellow 5, multinational companies like Nestle, Kraft, as well as General Mills, Campbell, and many others conglomerates are observing, listening, and are now removing artificial dyes from many of their products, either replacing them with natural solutions or removing them altogether. This is a good start.

Soon, with the increasing scrutiny and louder voices from us consumers, the FDA and other regulatory bodies around the globe will hopefully ban artificial dyes and flavors, too, not just in our food but also in cosmetics, fashion, and personal care products.

If it is bad for us, it is terrible for the planet, nature, the environment — think what these artificial dyes are doing to our rivers and oceans, poisoning the waters and the marine life. If the water is bad, it means the soils, plants, organisms above and below the ground, including us humans, are slowly getting poisoned unknowingly (again, not vegan as it harms other beings indirectly or as a consequence of it).

But now that we are aware, we have the power to make the kinder, more compassionate, and conscious decisions, which will trickle down and slowly form a ‘tsunami’ that will make every single player in the supply, production, manufacturing, and consumer chain make these kinder decisions too.